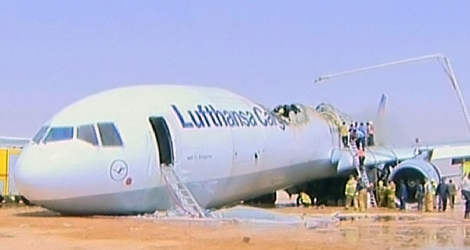 On 27 July 2010, Lufthansa Cargo flight GEC8460 was scheduled to depart from the Frankfurt International Airport, Germany at 01h00 UTC for a cargo flight to the King Khalid International Airport – Riyadh, Kingdom of Saudi Arabia (KSA). The departure was delayed by more than two (2) hours due to water in the Centre Accessory Compartment (CAC).

Lufthansa Cargo flight GEC8460 departed Frankfurt at 03h32 UTC with 79,247 kilograms (kg) of cargo including dangerous goods. The take-off weight (TOW) was 248,307 kg. There were 2 flight crew members on board. The First Officer (FO) was the Pilot Flying (PF) and the Captain was the Pilot Monitoring (PM).

This flight was the first time this Captain and First Officer (FO) were flying together. The FO had been employed by Lufthansa Cargo for seven (7) months. The Captain decided that the FO would be the PF, as the FO had not flown into Riyadh before and it would be an appropriate leg for him to fly. En-route to Riyadh at cruising altitude, both flight crew members took advantage of the company napping policy, where each had about thirty (30) minutes of sleep while remaining in their respective seat. The en-route portion of the flight was uneventful.

During the approach to Riyadh , Lufthansa Cargo flight GEC8460 was radar vectored for an Instrument Landing System (ILS) approach for runway 33 Left (33L). With flaps at 35 degrees (°) and a landing weight of 207 tons (t), the Reference Approach Speed (Vref) was determined as 158 knots (kt).

The Auto Pilot (AP) and the Auto Throttle System (ATS) had been turned OFF by the FO. The surface winds were from 340° at 14 kt and the temperature was + 39°Celcius (°C). The aircraft was centered on the glide slope and localizer during the approach, until 25 seconds (sec.) before touchdown when it dipped by half a dot below the glide slope.

During that period, the indicated airspeed oscillated between 160 and 170 kt, centered about 166 kt. The ground speed was 164 kt until 20 sec. prior to touchdown, when it began to increase and reached 176 kt at touchdown. The flare was initiated by the FO between 1.7 and 2.0 sec. before touchdown, that is: 23 to 31 feet (ft) above the runway.

The main gear of Lufthansa Cargo flight GEC8460 touchdown took place at 945 ft from the runway threshold at a descent rate of -13 ft/sec. (780 ft/min) resulting in a normal load factor (nlf) of 2.1g.

The aircraft bounced with the main gear reaching a maximum height of 4ft above the runway with the spoilers deployed to 30 following main-wheel spin up. During this bounce, the Captain who was the Pilot Monitoring (PM) pushed on the control column resulting in an unloading of the aircraft. The aircraft touched down a second time in a flat pitch attitude with both the main gear and nose gear contacting the runway, at a descent rate of -11 ft/sec. (660 ft/min), achieving a nlf of 3.0g.

Just prior to this second touchdown, both pilots pulled on the control column, which combined with the rebound of the nose gear from the runway, resulted in a 14 pitch angle during the second bounce. Additionally, the spoilers reached their full extension of 60 following the compression of the nose gear strut during the second touchdown. During this second bounce, the main gear reached a height of 12 ft above the runway. Early in this second bounce, the Captain pushed the control column to its forward limit and the elevators responded accordingly.

Prior to the third and final touchdown, both pilots pulled back on the control column at slightly different times. Although the elevators responded accordingly and started to reduce the nose-down pitch rate, the aircraft was still pitching down at the third touchdown.

During this third touchdown, Lufthansa Cargo flight GEC8460  contacted the runway at a descent rate of -17 ft/sec (1020 ft/min), thus achieving a nlf of 4.4g.

At this point, the aft fuselage ruptured behind the wing trailing edge. Two (2) fuel lines, one (1) fuel line to the number (no.) 2 engine/Auxiliary Power Unit (APU) and, a transfer line to the tail fuel tank were severed and fuel spilled within the left hand wheel well. A fire ignited and travelled to the upper cargo area. The Captain attempted to maintain control of the aircraft within the runway boundaries. Not knowing about the aft fuselage being ruptured and dragging on the runway, the Captain deployed the engine thrust reversers, but only the no. one (1) and the no. three (3) engines responded.

The Captain maintained directional control of the aircraft as best he could and requested the F/O to declare a Mayday. The aircraft then went towards the left side of the runway as the Captain attempted, without success, to maintain the aircraft on the runway.

As Lufthansa Cargo flight GEC8460 departed the runway, the nose gear collapsed and the aircraft came to a full stop 8800 ft from the threshold of the runway and 300 ft left from the runway centerline.

The fuel to the engines was cut off and both pilots evacuated the aircraft by using the slide at the Left One (L1) door. The mid portion of the aircraft was on fire. Vehicles from the Fire and Rescue Services (FRS) arrived at the aircraft within a very short period of time. Both pilots were taken to the hospital and the fire was eventually extinguished.