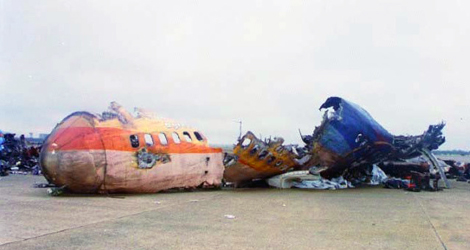 On October 31, 2000, at 2317 Taipei local time3 (1517 UTC), Singapore Airlines flight SQ006, a Boeing 747-400 aircraft, bearing Singapore registration 9V-SPK, struck barriers and construction equipment during takeoff on Runway 05R, a portion of which had been closed for maintenance, at CKS Airport.

Heavy rain, reduced visibility, and strong winds associated with typhoon “Xangsane” prevailed at the time of the accident.

Impact forces and post-accident fire destroyed the aircraft. There were approximately 124,800 kilograms of takeoff fuel in fuel tanks for this flight.

The pilots commenced duty on October 30, 2000, in Singapore and had flown the first sector (Flight SQ006) of the scheduled trip sequence (Singapore to Taipei, Taipei to Los Angeles, Los Angeles to Taipei and return to Singapore). All three pilots arrived at the hotel in Taipei around midnight local time of October 30, 2000 and stayed at the hotel until departure for the airport at 2035, the evening of October 31, 2000. The pilots reported for duty at 2153 and completed preflight departure duties, including receiving dispatch documents, and boarded the aircraft, which was parked at Bay B5.

The dispatch documents, including the NOTAM pertaining to partial closure of Runway 05R, were reviewed by the pilots. CM-1 was the “pilot flying” and conducted the taxi and takeoff. According to the transcript of the air traffic control (ATC) Clearance Delivery, at 2257:16, the flight crew received the ATC clearance.

At 2305:57, after pushback from Bay B5, Singapore Airlines flight SQ006 requested and received clearance from the controller to commence taxiing, “Singapore six, taxi to Runway zero six, via Taxiway, correction, Runway zero five left, via Taxiway Sierra Sierra, West Cross, and November Papa.” According to the cockpit voice recorder (CVR) transcript, at 2306:08, CM-2 stated, “I missed that man, what is it,” after the controller issued the taxi clearance. CM-1 repeated the taxi clearance and for the next few seconds the flight crew discussed the route to Runway 05L.

At 23:11:49, according to the CVR transcript, CM-1 stated, “The five left also imp..imp..improve already the visibility to five hundred fifty meters.”

At 2315:48, the flight crew completed the before takeoff checklist. This was followed 2 seconds later by CM-2 saying, “OK green lights are here.” CM-1 responded, “It going to be very slippery, I am going to slow down a bit, slow turn here.” According to data from the FDR, the aircraft turned right from Taxiway NP onto Taxiway N1, and made a continuous right turn onto Runway 05R.

At 2316:07, the CVR recorded CM-2 saying, “and the PVD8 hasn’t lined up ah.” CM-1 responded, “Yeah we gotta line up first,” followed by CM-3 saying, “we need forty five degrees.” At 2316:23, CM-1 stated, “not on yet er PVD huh never mind we can see the runway, not so bad. OK, I am going to put it to high first. OK ready er, so zero one zero is from the left lah OK.” According to the CVR transcript, CM-2 responded, “OK,” followed by the sound of the windshield wipers going to high speed. At 2316:44, the CVR recorded the sound of engine noise increasing, followed 11 seconds later by both CM-2 and CM-3 calling “eighty knots.”

At 2317:16, CM-1 stated, “(explicative) something there,” followed one second later by the first sound of impact. Approximately 33 seconds after the takeoff roll commenced, the aircraft collided with several concrete “jersey” barriers, 2 excavators, 2 vibrating rollers, a bulldozer, an air compressor cart, and a pile of metal reinforcement bars on Runway 05R, between Taxiways N4 and N5. The FDR recorded airspeed about 158 knots and ground speed about 131 knots at the end of the recording.