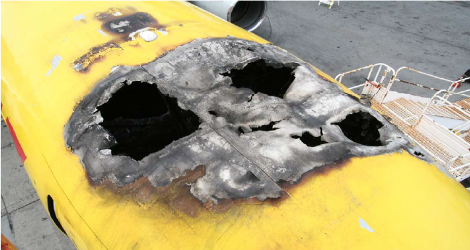 The captain and the first officer evacuated the airplane through the cockpit windows and were not injured, and the airplane was substantially damaged.

ABX AIR flight ABX1611 , a cargo flight , was operating under the provisions of 14 Code of Federal Regulations Part 121. At the time of the fire, the airplane was parked near a loading facility, all of the cargo to be transported on the flight had been loaded, and the doors had been shut.

The National Transportation Safety Board determines that the probable cause of this accident was the design of the supplemental oxygen system hoses and the lack of positive separation between electrical wiring and electrically conductive oxygen system components.

The lack of positive separation allowed a short circuit to breach a combustible oxygen hose, release oxygen, and initiate a fire in the supernumerary compartment that rapidly spread to other areas.

Contributing to this accident was the Federal Aviation Administration’s (FAA) failure to require the installation of nonconductive oxygen hoses after the safety issue SINGAPORE AIRLINES – BOEING B777-312ER (9V-SWG) conductive hoses was initially identified by Boeing.

The safety issues discussed in this report involve the conductivity and the aging of oxygen hoses, the FAA’s airworthiness directive process, the proximity of oxygen system components to electrical wiring, the electrical grounding of oxygen systems, the potential for passenger reading lights on transport-category airplanes to become an ignition source, additional smoke detector systems for cargo airplanes, and the effectiveness of ABX Air’s continuing analysis and surveillance program.

Eleven new safety recommendations to the FAA and one to ABX Air are included in the report of ABX Air flight ABX1611.