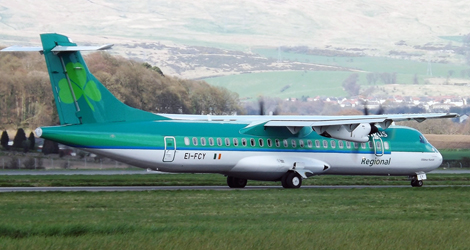 Air Lingus Regional flight EI3728 was on a scheduled passenger flight from Cork Airport to Manchester Airport and had made an uneventful approach to Runway 23R. The co-pilot was PF and, after carrying out a normal landing, the aircraft started to deviate to the left of the runway centreline. The commander took control from the co-pilot in accordance with the normal procedure, and initially applied some rudder and then attempted to use nosewheel steering (NWS) to correct the deviation but the aircraft continued to turn left. The commander applied brakes and stopped the aircraft on the left side of the runway.

The co-pilot noticed that the Multifunction Computer (MFC) modules 1B and 2B switch lights on the overhead panel were both indicating fault. The pilots reset the MFC modules and all systems were restored, allowing them to taxi the aircraft to its stand without further incident. Subsequently the commander reported that the NWS was ineffective during the landing roll and that no master cautions or warnings were observed, but that she noticed several engine indications were missing from the engine and warning display (EWD).

Failure of both MFC 1B and 2B causes the weight-on-wheels system to be unavailable, which results in the NWS becoming inoperative.

When the commander realised that the NWS was inoperative, she concentrated on stopping the aircraft but also noticed that there were unusual indications on the EWD. The pilots diagnosed and rectified the dual MFC failure after they observed the fail lights on the overhead panel. They were unaware of the failure until after the aircraft had stopped.
After landing, the commander applied some rudder before attempting to use the NWS to keep the aircraft straight.

The FCOM indicates that the rudder is effective in maintaining directional control above 40 kt. However, when the commander took control, it is likely that the aircraft speed was such that rudder authority alone was insufficient to correct the deviation from the centreline.
Download Report