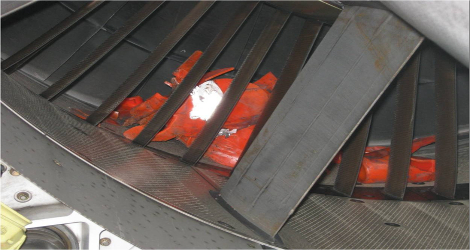 The aircraft was received by a handling team from the ground handling agent (GHA) of the airline.

The FS operated the Aircraft Docking Guidance System (ADGS) to guide the aircraft into the parking bay. The aircraft stopped at the correct stop-bar line when the ADGS display indicated “stop”. The aircraft engines were on idle and had not been shut down.

Both the EOs approached the aircraft to perform their allocated tasks. Upon seeing the ADGS “stop’ display, EO 2 moved towards the No. 2 engine of Air Asia A320 9M-AHA.

He was carrying one cone in each hand, with the intention of placing the cones to mark the hazard zone around the engine.

After placing one cone in front of the No. 2 engine of Air Asia A320 9M-AHA , the second cone was sucked out of his hand and was ingested into the engine.

The ingestion of the cone resulted in a loud “POP” sound. The ingested safety cone was shredded by the engine blades.

The FS noticed that one safety cone had been placed in front of the No. 2 engine and several pieces of the orange material were scattered behind the No. 2 engine. The FS then plugged in his headset to establish communications with the flight crew of Air Asia A320 9M-AHA.

The FS informed the flight crew that the chocks were in place and gave the thumbs up for the passenger loading bridge operator to dock. The engines were shut down subsequently by the flight crew.

The FS approached the EO 2 to ascertain the situation. After that, the FS informed the flight crew of the situation and requested for the pilot of Air Asia A320 9M-AHA to come down to the tarmac to review the situation.

EO 1’s task was to place the first pair of chocks at the nose gear after the aircraft was marshalled to a complete stop, even though the engines may still be running. After that, the EOs had to wait for the anti-collision lights/ aircraft engine to be switched off and for the thumbs up signal to be given by the headset man before approaching the aircraft and carrying out the rest of their tasks. EO 2 approached the aircraft before the thumbs up clearance from the headset man. This was contrary to GHA’s SOP (standard operating procedures).

According to the GHA, EO 2 was aware of the ramp safety procedures when working around parked aircraft, whereby he should wait for the anti-collision lights/ aircraft engine to be switched off and for the thumbs up signal from the headset man before approaching the aircraft. However, he had apparently forgotten about this safety precaution and took the ADGS “stop” display as a signal for clearance to approach the aircraft.