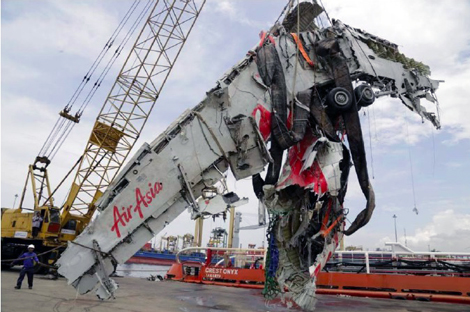 Air Asia flight QZ8501 crashed on 28 December 2014 : was an Airbus A320-216 aircraft registered as PK-AXC cruising at 32,000 feet on a flight from Juanda Airport, Surabaya, Indonesia to Changi Airport, Singapore with total occupants of 162 persons.

The crew performed the ECAM procedure on the first three master caution activations.

After the 4th master caution, the FDR recorded different pilot action and the parameters showed similar signature to those on 25 December 2014 when the FAC CBs were pulled on the ground.

The aircraft entered an upset condition and the stall warning activated until the end of recording.

Air Asia flight QZ8501 crash-ed after reaching the highest altitude of 38,500 feet and largest roll angle of 104° to the left. Then the aircraft lost altitude with a rate of up to 20,000 feet per minute.

The investigation concluded that contributing factors to this accident were: