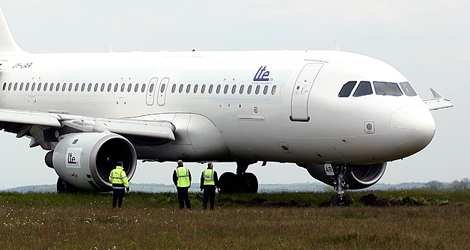 While landing on Runway 14 at Leeds Bradford Airport the aircraft touched down just beyond the end of the marked touchdown zone with low autobrake selected. Manual wheel braking commenced shortly after mainwheel touchdown. At a groundspeed of around 70 kt the brakes ceased operating, for about 17 seconds.

A pronounced dip in the runway surface initially prevented the pilots from seeing the runway end.

When it became apparent to the commander that it would not be possible to stop before the end of the runway, he deliberately did not select alternate braking, as this would have caused loss of nosewheel steering, but instead used nosewheel steering to turn the aircraft sharply to the right.

The aircraft skidded sideways and came to a halt with its nosewheels off the runway, shortly before the end of the paved surface and the start of a steep down slope.

The cause of the braking loss could not be positively established but it was consistent with the effects of excessive noise in the electrical signals from the mainwheel tachometers used to sense groundspeed. Two of the tachometer driveshafts were found bent and it was known that this encouraged a resonant condition that could cause tachometer signal errors above the groundspeed at which they would be detected by the aircraft’s monitoring systems.

Should the condition affect both main landing gears simultaneously, the brake control system logic could generate an erroneous aircraft reference speed, which could activate the anti-skid system and release the brakes. Fluctuation in the signal errors would prevent the system from detecting and correcting the braking loss or providing a warning to the crew.

It was found that there were a number of other known anomalies with the brake control and monitoring system that could cause either brake failure or locking of the wheels, some of which had resulted in previous incidents and accidents.

The aircraft manufacturer and the Airworthiness Authority had defined and implemented corrective actions, and redesigned tachometer driveshafts and updated software intended to correct some of the faults were available, but had not been incorporated on a substantial number of aircraft, including JY‑JAR.