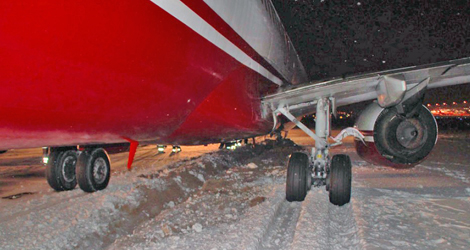 On board were six crew members and 125 passengers. Take-off run occurred with one hour delay at which the airplane veered to the right off the runway after about 150 m.

After the initial contact with the tower the controller instructed “… hold short, I call you”, which the crew acknowledged. When the controller asked “… ready for rolling” the answer was “affirm …”. Which was followed by the instruction “… line up one zero”.

At around 2128 hrs, about 13 seconds later, take-off clearance was given “… cleared take-off, company traffic is 6 miles“.

Rolling to and onto the runway occurred without stopping and with a ground speed of about 21 kt. The airplane lined-up on runway 10 (runway direction 099°) with a right-hand turn.

While lining-up on the runway the two main landing gears reached a position left of the runway centre line.

The crew of Air Berlin flight AB6777 steered the airplane to the right and stated that afterwards it was no longer possible to steer it to the left.

According to the Flight Data Recorder (FDR) both thrust levers were moved from about 36° to about 46° while passing a heading (HDG) of about 20° with a ground speed of about 12 kt. Thrust of both engines increased from about 21% N1 to about 43% N1. The recordings of the left and right N1 show that the engines accelerated with a difference of initially about 2% and later about 4%; the left engine showed the higher thrust values throughout. After that, N1 of the left engine remained at about 43.2% and of the right at about 42.5%; for the next 9 seconds both values remained constant. About 43% N1 of the left engine was reached at HDG 73°; at that time ground speed was about 12 kt.

The nose wheel and the right main landing gear came to a stop after about 15 m (about 150 m after the threshold) and about 5 m alongside the runway in unpaved terrain; the left main landing gear remained on the runway. The fuselage was pointing into the direction of 107°.

The cause for the serious incident was :