An instrument landing system approach to Runway 13 was flown using the autopilot.

At approximately 80 feet above ground level, the captain of Air Canada flight ACA261 disengaged the autopilot and manually completed the approach and landing.

The aircraft touched down firmly approximately 1600 feet from the runway threshold and well left of the runway centerline. 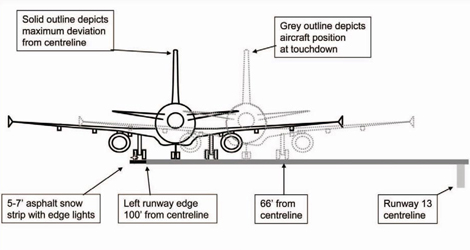 There was no other damage to the aircraft, and there were no physical injuries.

The most recent weather observation at Winnipeg was the 1815 central standard time observation and was as follows:

A crew that had landed about three minutes after Air Canada flight ACA261 indicated that the weather was essentially as reported by the ATIS and that the runway end and edge lights provided sufficient reference for a landing at minimums. The sequenced lights along the approach path were visible on approach but disappeared temporarily as the aircraft descended through a fog layer, from 500 to 400 feet above ground level (agl).

To avoid reflection from the freezing fog particles, the crew of this aircraft did not use landing lights.

The captain aligned the aircraft with the runway without compensating for crosswind, allowing the aircraft to drift off centerline.

After touchdown, the aircraft’s left landing gear tracked off the runway.

It is likely that one or more of the effects of the vision correction used by the pilot flying interfered with his ability to effectively use the visual references available to land.

Other Finding : The cockpit voice recorder (CVR) was not disabled following the occurrence and the data were overwritten. Consequently, CVR information relevant to the occurrence was not available to TSB investigators.

Air Canada flight AC848 was a line flight from Toronto Pearson to London Heathrow on 28-01-2008, a Boeing B767-333 (C-FMXC). During the pre-flight preparations there was a potential for the flight to depart behind schedule. When the First Officer reported for duty he...
Read More