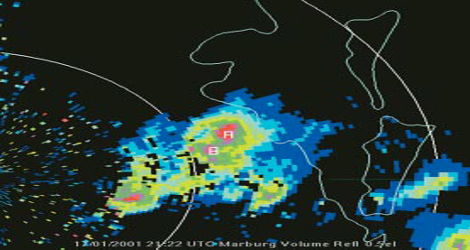 On 18 January 2001, Qantas flight VH-TJX, a Boeing 737-476 aircraft, encountered microburst windshear at 0729 EST while conducting a go-around from runway 19 at Brisbane aerodrome during an intense thunderstorm. The aircraft was operating a scheduled fare-paying passenger service from Sydney to Brisbane.

As the aircraft passed 1,000 ft during the landing approach, it encountered rain and some isolated hail. The approach lights for runway 19 were visible to the crew, and the pilot in command elected to continue the approach.

At about 500 ft, the weather deteriorated rapidly, and the aircraft encountered hail and turbulence. The pilot in command of Qantas flight VH-TJX discontinued the approach and applied go-around engine thrust.

The aircraft commenced to climb normally at about 3,600 ft/min, however, shortly after the go-around was initiated, the climb performance substantially reduced to less than 300 ft/min due to the effects of the microburst downdraft and from flight through heavy rain.

The pilot in command applied maximum engine thrust to improve the aircraft’s climb performance, and advised the Aerodrome Controller that the aircraft had encountered severe windshear.

The crew of Qantas flight VH-TJX then diverted the aircraft to Maroochydore, where it landed without further incident.

The Bureau of Meteorology (BoM) issues severe thunderstorm warnings to the public when their intensity is expected to produce dangerous phenomena, such as hail with a diameter of more than 2 cm, wind gusts in excess of 90 kph (48.5 kts), flash floods, and tornadoes.

There was no requirement for Airservices Australia to receive such aerodrome warnings or lightning alerts from the BoM, and they did not do so.

At 0613, TJX commenced ‘pushback’ at Sydney, and became airborne at 0622 to Brisbane. The crew relied on the 0213 amended aerodrome forecast issued by BoM, and was not aware of the 0552 public weather warning concerning the severe thunderstorms south of Brisbane.
At 0630, BoM issued a routine aerodrome report for Brisbane aerodrome that superseded the amended aerodrome forecast that was issued at 0213. The trend type forecast appended to the routine aerodrome report included information that thunderstorms and rain showers were forecast during the period 0700 to 0900.

The controllers received that forecast at 0636 but did not pass it to the crew of Qantas flight VH-TJX at any stage.

The aviation-related forecasts for Brisbane aerodrome did not refer to thunderstorms from 0213 until 0630, and the 0630 forecast did not contain information about the phenomenon associated with severe thunderstorms that was included in the public forecasts or in the 0635 aerodrome warning. BoM’s forecasting staff used different criteria for the issue of public weather warnings and aerodrome terminal forecasts. Public weather warnings were issued for the Brisbane metropolitan area whenever radar or other evidence indicated that severe thunderstorms were present in, or expected to enter, the designated warning area. The Brisbane aerodrome terminal forecast was a statement of meteorological conditions expected for a specified period in the airspace within a radius of five nautical miles of the centre of the aerodrome. The public weather and aviation products could therefore at times present different information.

For some time before the occurrence, air traffic controllers in the Brisbane aerodrome control tower were concerned about the visual appearance of the approaching thunderstorm, and its image on their weather radar display. However, the terminology and language used by air traffic controllers did not convey their concerns about the intensity of the thunderstorm to the crew of TJX until the aircraft was on final approach. The Manual of Air Traffic Services required controllers to pass hazard alert information as soon as practical to aircraft likely to be affected by known hazards.

Had the controllers been provided with the aerodrome warnings and lightning alerts, that additional information may have assisted them in determining if a thunderstorm hazard alert should have been issued to the crews of approaching aircraft.

In this occurrence there was no effective mutual exchange of information between the controllers and the crew. Had the controllers provided relevant information about the storm to the crew, the crew may have been in a better position to determine whether it was advisable to discontinue the Qantas flight VH-TJX towards an area of hazardous weather.

The crew’s decision to continue the approach may have been influenced by their sighting of the aerodrome when they were on the downwind leg, and the runway 19 lighting system while on final approach. In previous weather-related occurrences, crews have attempted to land because they had visual contact with the runway environment. Investigation of those occurrences found that crew decisions to continue the approach and landing may have been more compelling than the deteriorating weather they were approaching.

The occurrence was regarded as a serious incident in accordance with Annex 13 to the Convention on International Civil Aviation. It again highlights that thunderstorms and convective activity in terminal areas are a significant issue in Australian and international aviation. It also illustrates the significant adverse effect of heavy rain on aircraft performance. The hazards associated with those weather conditions are not solely confined to the presence of severe thunderstorms, and should not be underestimated.

Whenever thunderstorm activity is forecast, there is a potential for microburst windshear and heavy rain. Aircraft in the landing, take-off, missed approach or goaround phases of flight are particularly vulnerable in or near thunderstorms. The effects of microburst windshear and, to a lesser extent, the aerodynamic penalties imposed by flight through heavy rain, can place an aircraft in a potentially-high-risk situation.

This serious incident also highlights that without extensive Doppler weather radar capabilities, and in the absence of appropriate systems designed to detect hazardous wind shear in Australia, there is a need for collaborative decision making among forecasters, controllers, pilots and operators during periods of intense or severe convective weather.