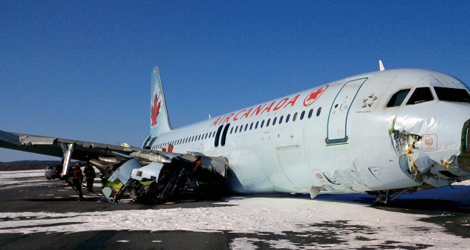 Air Canada flight AC624 started to descend about 0.2 nm from the FAF. The aircraft crossed the FAF at 2170 feet indicated altitude

At approximately 0030 Atlantic Daylight Time, while conducting a non-precision approach to Runway 05, the Air Canada flight AC624 severed power lines, then struck the snow-covered ground about 740 feet before the runway threshold.

The aircraft continued airborne through the localizer antenna array, then struck the ground twice more before sliding along the runway. It came to rest on the left side of the runway, about 1900 feet beyond the threshold.

The aircraft was destroyed.

There was no post-impact fire.

The emergency locator transmitter was not activated.

The accident occurred during the hours of darkness.