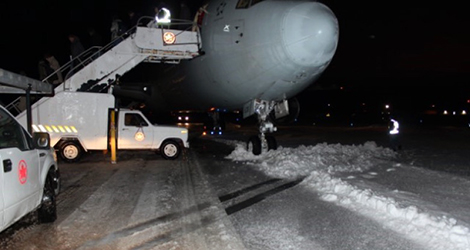 At approximately 1738, the weather at CYHZ was below approach minimums for the runway in use at the estimated time of arrival, so the Air Canada flight AC614 entered a holding pattern to wait for the weather conditions to improve as forecast.

At approximately 1814, the weather conditions had improved sufficiently to conduct an approach and the Moncton Area Control Centre (ACC) controller provided vectors for an approach to Runway 32, which the crew accepted.

At 1817:03, as the aircraft was proceeding to Runway 32, the Halifax terminal controller issued the crew the CYHZ aerodrome special meteorological report (SPECI) from 1809, which indicated visibility 1 ¼ statute miles (SM) in light freezing drizzle and mist; vertical visibility 200 feet above ground level (AGL); temperature and dew point both −1 °C.

The controller added the current winds – wind 350° magnetic (M) at 20 knots, gusting to 30 knots, and the altimeter setting of 29.14 inches of mercury.

The terminal controller also offered the crew the option of landing on Runway 23, because it had just become available. Runway 23 is longer than Runway 32, and has a precision approach system with lower approach minimums.

The crew adjusted the aircraft’s instruments to the required settings and briefed the Runway 23 approach.

At 1817:36, the Halifax terminal controller relayed the runway surface condition (RSC) report that was issued at 1808 for Runway 23 to both the occurrence crew and the crew of an Embraer aircraft that was flying ahead of it.

Both crews were planning to land on Runway 23.

Based on this RSC, a Canadian Runway Friction Index was not provided, nor was one required.

The Embraer aircraft landed on Runway 23 at 1822. After providing the crew with instructions to exit the runway onto Taxiway A at the end of the runway, the Halifax tower controller asked the crew for comments on the approach.

The crew replied, “we had the field at 300 feet; braking action was very poor, actually”.

Once the aircraft was off the runway, the crew switched to the Halifax ground controller’s frequency and reported that the runway was “very, very icy; it’s basically a skating rink“.

At 1824:22, the Halifax tower controller relayed the braking action report to the crew of a DHC-8 aircraft that was on approach for Runway 32, stating that the Embraer crew reported, “lights in sight at 300 [feet] AGL on that approach, and braking action was poor on Runway 23.”

At 1824:50, the Halifax tower controller called the Halifax Terminal controller to say that, “[the pilot of the Embraer aircraft] says the runway is a skating rink. He barely got stopped by the end of the runway and turned on [Taxiway] A”.

After the Halifax terminal controller asked for more information on the conditions, the Halifax tower controller replied, “lights in sight at 300 feet above the ground.”

At 1825:15, the Halifax terminal controller contacted the occurrence flight crew to provide the Embraer’s pilot weather report (PIREP), stating, “we had [the Embraer] roll out on 23, and he said it was very slippery. He barely got stopped towards the end of it. As far as visibility he saw things at 300 feet above the ground.”

The crew responded, “thanks for the heads up.” 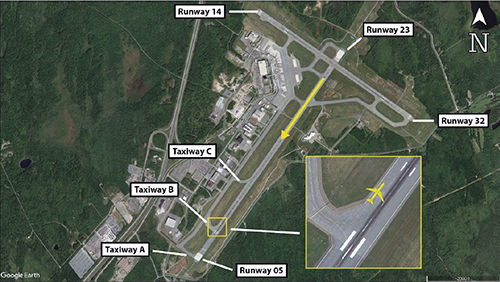 At 1826:00, the DHC-8 aircraft landed on Runway 32. At 1826:54, the crew of the occurrence aircraft switched to the Halifax tower controller’s frequency, and was provided information for the planned landing on Runway 23.

The Halifax tower controller asked the crew if it had received the comments from the Embraer that had just landed, and the crew responded in the affirmative.

At 1827, the DHC-8’s crew was asked for comments on the approach. The crew reported, in part, that braking was good for them but they could see how it was slippery.

At 1828, the occurrence flight was cleared to land on Runway 23.

As part of the clearance, the Halifax tower controller informed the crew that the wind was 350°M at 24 knots, gusting to 31 knots, and instructed it to exit onto Taxiway A, at the end of the runway.

The aircraft landed within the first third of the runway at an airspeed of about 140 knots.

As the aircraft slowed and the crew reduced reverse thrust, the braking action was noted to become nil.

The captain attempted asymmetrical reverse thrust to correct weathervaning due to a loss of steering authority.

The crosswind pushed the aircraft sideways, causing the nose wheel to roll into the snow off the right edge of the runway.

This caused the forward motion of the aircraft to be translated into a slow sideways drift and clockwise rotation on the icy runway.

Pushed by the crosswind, the Air Canada flight AC614 rotated 180°, coming to rest facing the opposite direction, with all the wheels on the paved portion of the runway.

At 1831, the crew called the Halifax tower controller to report that the aircraft was stopped on the runway, facing the wrong way.

The crew also asked the controller to not allow any aircraft to land on the runway.

At 1835, the Halifax tower controller informed the crew that Runway 23 was closed.

No injuries were reported. There was no damage to the aircraft.

The passengers were shuttled to the terminal on airport park and ride buses, and the aircraft was towed to the gate after release by the TSB.

At approximately 1838, an Airbus 320 aircraft landed on Runway 32, but was unable to taxi off the runway because of the ice that covered the runway and taxiway.

The aircraft remained stopped on the runway until sand and chemicals were applied. Runway 32 was closed until 2027. Runway 23 was reopened once the aircraft was towed off the runway.