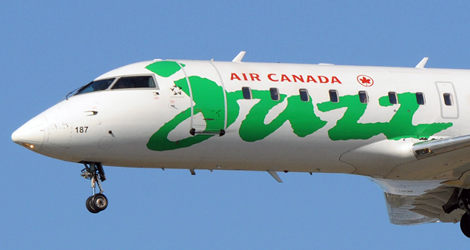 At about 1436 Pacific standard time, Air Canada Jazz flight QK8205 operated with a Bombardier CL600-2B19 (C-GJZF) , departed Vancouver for a 47-minute flight to Prince George. According to the operational flight plan (OFP), the minimum fuel requirement at take-off was 5738 pounds and the calculated fuel burn to destination was 2405 pounds.

According to the flight data recorder, the take-off roll was initiated with 6100 pounds of fuel on board, which exceeded the OFP minimum fuel requirements by 362 pounds. Based on the terminal area forecast (TAF) issued at 0942, the weather conditions to be expected at the time of arrival at destination were as follows: ceiling 2000 feet above ground level (agl), visibility 3 statute miles in light snow and wind from 010° true (T) at 15 knots gusting to 25 knots.

While en route, two new TAFs were issued for Prince George, one at 1508 and one at 1519. Both indicated a deterioration of weather conditions with visibility forecast to be as low as ¼ mile in heavy snow and a vertical visibility of 200 feet expected temporarily between 1500 and 1700. The flight crew was not aware of these new TAFs. However, at 1508, the flight crew received the 1500 aviation routine weather report (METAR), which was as follows: wind 030ºT at 23 knots gusting to 29 knots, visibility ⅝ statute mile with light snow showers and drifting snow, sky obscured at 900 feet, and temperature -5ºC.

The runway surface condition was 50 per cent bare and dry and 50 per cent covered with drifting snow.
The runway friction index was 0.46.

The published landing minimum was 405 feet agl and a visibility of 1 ¼ miles. The flight crew planned for a stabilized constant descent angle (SCDA) approach. The SCDA consists of a stabilized approach to achieve a constant rate of descent. The criteria are as follows: a descent angle of approximately three degrees; stable airspeed, power setting, and attitude; and the aircraft configured for landing (flaps set at 45°) one to two miles from the final approach fix (FAF). At about 23 miles from the threshold, the tower informed the flight crew that the ceiling was 800 feet with a visibility of ½ mile. The opposite landing runway (Runway 15) is served by a runway visual range (RVR), which indicated a visual range of 5000 feet.

At 12 miles on final, the flight crew was informed of a special weather report indicating a ceiling at 500 feet and a visibility of ⅜ mile in snow and drifting snow. The flight crew continued the approach, and at about eight miles on final, the flaps were extended to 20°, the landing gear selected down, and then the flight spoilers deployed. At 3.3 miles from the threshold, less than ½ mile from the FAF, the flaps were selected to 45° and the flight spoilers were retracted.

Based on the rapidly decreasing visibility, the flight crew carried out a missed approach on reaching the FAF. At that time, the fuel remaining on board was 4000 pounds, which exceeded the OFP minimum fuel requirements to proceed to the alternate airport by 1312 pounds.

As the flaps of Air Canada Jazz flight QK8205 were selected to 8° and the landing gear was retracted, the “FLAP FAIL” message appeared on the engine indication and crew alerting system (EICAS).

The aircraft initial climb rate was approximately 1600 feet per minute but gradually decreased with altitude until reaching 10 000 feet above sea level (asl), the initial cleared altitude. The flight was later cleared to maintain 15 000 feet asl as its final cruising altitude.

According to the quick reference handbook (QRH), if the flap failure occurs at greater than 5°, as in this occurrence, the aircraft should land at the nearest suitable airport.

If the flap failure occurs at 45°, no further action is required before landing. This is based on the fact that the landing will be carried out as usual. The QRH does not take into consideration the possibility of a missed approach and the impact it would have on the aircraft performance for obstacle clearance or fuel consumption. As well, it does not provide an alternative solution to the problem. In such a case, flight crews are expected to use their good judgement.

This flight crew cycled the flap electronic control unit (FECU) circuit breakers, but this did not clear the fault. The flap handle lever was then selected to different detent positions and the FECU circuit breakers were cycled again. The fault did not clear. The flight crew members requested a diversion to their planned alternate airport, Grande Prairie, and subsequently requested to go to Fort St. John, which was slightly closer.

En route, the flight crew attempted to find out what would be the best altitude and speed to provide the best fuel range. However, no such data were available. The flight management system (FMS) was used to determine the fuel prediction at Fort St. John.

At 1616,  Air Canada Jazz flight QK8205 landed at Fort St. John without further problem with about 500 pounds of fuel remaining, equivalent to less than 10 minutes of flight.

Findings as to Causes and Contributing Factors :

Findings as to Risk