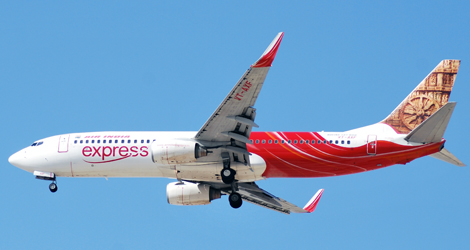 The aircraft was scheduled to fly on sector DUBAI – PUNE with flight IX212, the aircraft was flying on route N571. The departure from Dubai was at 16:30 Z. The aircraft was cruising at FL 370, with Auto Pilot CMD ‘A’ and Auto Throttle engaged.

At 17:53 Z after aircraft crossing PARAR and before reaching DOGET, the Commander left the cockpit for the washroom, however it was noticed by him that toilet was occupied hence he wanted to return.

The incident happened immediately after crossing PARAR at 17:53Z.

[…] the nose down command was recorded with control column force sensor sensing approx 20 lbs from the copilot side. This was due to the copilot adjusting his seat forward and inadvertently pressing the Control Column forward. […] the copilot also gave input on ailerons and caused the aircraft to bank.

At this moment he realized that, aircraft has gone into nose down configuration.

The commander immediately wanted to enter into cockpit and retrieve the situation; however Cockpit door was not opening. He used the emergency access code to enter the cockpit.

The total duration that he was out of the cockpit was approximately 40 seconds. The time taken after using emergency access code to release the cockpit door lock is maximum up to 30 seconds for the activation of Auto unlocks features.

At the same time CCIC (Cabin Crew In-charge) was paging to Cockpit however there was no answer from cockpit.

On entering the cockpit Captain saw aircraft is approx in 26° pitch down attitude, speed in red band throttles full back and with 5° of left bank. The aircraft was controlled manually and arrested Rate of Descent, he switched ON continuous relight and resumed level flight. There after Level Change was used to climb FL 370 the duration was approx 20 sec.

He Climbed to FL 370 and turned right to get on given track. A/P was engaged in LNAV/VNAV (Lateral Navigation /Vertical Navigation ) normal modes.

CCIC was informed about operations normal. There was no injury to passenger and crew. PA announcement to passenger were made. Thereafter flight operated normally and Landed safely at Pune at 19:40 Z.

The copilot has not put the seat harness and probably had no clue to tackle this kind of emergency.

The incident occurred due to inadvertent handling of the control column in fully automated mode by the copilot which got compounded as he was not trained to recover the aircraft in automated mode.

Subsequent recovery actions by the PIC without coordination with copilot was the contributory factor.