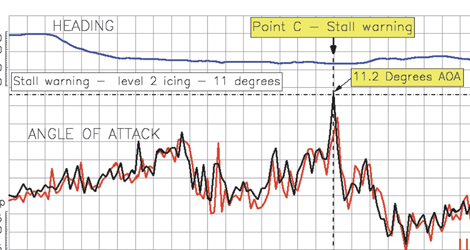 The flight crew reported for duty at Manchester at 2130 hrs on 21 February to operate a series of three cargo flights.

Following normal pre-flight preparations they flew an ATR-72 to Paris Charles de Gaulle, arriving at 2246 hrs; the commander was pilot flying on this sector.

They undertook duties on the ground and relaxed in the crew room at the airport, before boarding EI-FXA for the remaining two sectors. The aircraft departed for Newcastle on time at 0330 hrs, with the co-pilot as pilot flying.

The aircraft departed for Glasgow at 0607 hrs with the commander as pilot flying.

During the flight, both above and below FL100, the commander initiated conversation on a range of topics, speaking at length on some of them. The co-pilot’s responses were polite but brief.

The commander of Air Contractors flight AG2CL yawned from time to time during the flight. Both flight crew members missed, or mis-heard, communications from ATC during the flight. Some standard operating procedures were not adhered to.

Having calculated that the landing weight of Air Contractors flight AG2CL was 13.0 tonnes, he prepared the landing data card.

The calculated approach speed, for flap 30, with wind correction, was 99 KIAS for non-icing speeds and 114 KIAS for icing speeds. He noted that the approach could be completed using non-icing speeds, although level two ice protection was still ON.

When briefing the approach the commander of Air Contractors flight AG2CL did not state whether icing or non-icing speeds would be employed for the approach and did not address other topics stipulated in the company’s procedures.

The Glasgow approach controller provided radar vectors and descent instructions. During descent to 3,500 ft amsl, the co-pilot selected the terrain display ON to show the terrain north of the final approach, and the flight crew discussed the proximity of high ground.

At 0648 hrs the flight crew received of Air Contractors flight AG2CL a final approach vector from ATC to position the aircraft onto the ILS localiser. Having turned the aircraft onto the ILS intercept heading using the autopilot, the commander of Air Contractors flight AG2CL commented that he would reduce airspeed as ATC was positioning them onto a “NICE SHORT FINAL”.

The aircraft was 9.8 nm north-east of the airport at 3,000 ft amsl and 215 KIAS, and engine torque was reduced from 65% to about 15% on both engines. The approach controller instructed a descent to 2,000 ft amsl and cleared the aircraft to establish first on the localiser and then on the glideslope.

The commander commented “I’LL HAVE TO COME DOWN A BIT QUICKER THAN THAT, WON’T I” and increased the selected vertical speed. As the flight director captured the localiser the commander instructed the co-pilot to arm the approach mode. Engine torques were reduced to approximately 0% and the rate of descent was reduced.

Engine torques were reduced to about 3%, airspeed reduced, and the autopilot progressively pitched the aircraft nose-up as it maintained 2,000 ft amsl.

Neither of the flight crew mentioned the gradually reducing airspeed.

The co-pilot commented that they were 6.5 nm from the runway, but that the autopilot had not yet captured the glideslope. With the aircraft below the glideslope, the approach controller inquired whether it was established on the ILS.

As the first officer keyed the radio to respond, the stall alert sounded and the stick shaker activated. Simultaneously, the autopilot disconnected. The aircraft was approximately 1,700 ft agl at 111 KIAS and the angle of attack was +11.2°.

The co-pilot called “FLY THE AIRCRAFT (EXPLETIVE)”. The commander almost immediately pitched the aircraft nose down to -10° and advanced the power levers almost to full power, saying as he did so “I’VE GOT IT I’VE GOT IT DON’T WORRY” Airspeed reduced to 104 KIAS before increasing.

The pitch attitude remained approximately -10° and the co-pilot called “NOSE UP NOSE UP” to which the commander replied “NO”.

At 125 KIAS the commander started to pitch the aircraft nose-up, having descended to approximately 1,600 ft agl. The commander levelled the aircraft at about 1,900 ft amsl. Engine torque was now 98 % and airspeed continued to increase. Having received no response, the controller asked again if the aircraft was established on the ILS.

The co-pilot replied that the aircraft was established on the localiser, and the controller instructed the pilots to contact the tower controller. As the co-pilot read the instruction back to the controller, the airspeed exceeded the flap 15° Vfe limit of 170 KIAS and the overspeed warning system activated.

Airspeed peaked at 174 KIAS and the limit was exceeded for around 5 seconds . The commander retarded the power levers, reducing engine torque rapidly to 35%, and then more gradually to about 1%. A moment later the co-pilot suggested “PUT THE AUTOPILOT IN” to which the commander replied “SHHH JUST STEADY ON”.

The co-pilot set propeller rpm to MAX on command. The flight director began to capture the glideslope 4.8 nm from the runway at about 1,850 ft amsl, 0.5 dot above the glideslope.

As the aircraft descended, its airspeed reduced to a minimum of 111 KIAS and the angle of attack reached 10.5° +0.5° below the stall alert stick shaker threshold.

Passing approximately 1,500 ft amsl, the flight crew attempted to re-engage the autopilot but it disconnected immediately. Simultaneously, engine torque was increased to 45%, airspeed increased and the angle of attack reduced.

The controller asked if the aircraft was still on frequency and the co-pilot replied “AFFIRM, STANDBY WE’VE JUST GOT… EH…A FEW PROBLEMS”, before advising the controller that the problem had been resolved and that he would contact the tower.

At an airspeed of 115 KIAS, 3.4 nm from the runway, the autopilot was engaged and the aircraft was fully configured for landing with flap 30° selected. The remainder of the approach and landing was completed without further incident until touchdown, when a nacelle overheat warning activated. The flight crew did not action the associated procedure.

The commander of Air Contractors flight AG2CL taxied the aircraft to its parking position and the crew shut down the aircraft. Having finished their flying duty, the flight crew went to their hotel.

The co-pilot then contacted the company’s flight safety department and an internal investigation began.

The company informed the Irish Air Accidents Investigation Unit on 23 February, and the AAIB was informed on 24 February. Although the flight progressed normally until the approach to Glasgow there was evidence that the commander was not operating in a manner consistent with the company’s procedures.

Standard calls and responses were not always carried out correctly, he engaged in conversation on non-operational topics below FL100 and did not always use standard radiotelephony phrases. Several items from the company’s prescribed briefing topics were omitted from the approach briefing for Glasgow.

This was his first night-flying duty following a period during which he had slept ‘normal’ hours, at local night. Although he stated that he was well-rested prior to flight, the incident occurred almost 24 hours after the end of his last proper sleep. Before his flying duty, he drove approximately 2 hrs and 45 minutes to his base.

Consequently, knowingly or not, he may have been tired or fatigued.

The manner in which the commander responded to monitoring calls by the co-pilot is likely to have discouraged further input at a time when effective cross-cockpit communication would have assisted in ensuring safe flight. Fatigue or tiredness caused by the pilots’ diminished uality of rest in the period prior to this flight duty would have influenced effective monitoring.

The Flight Crew Operating Manual (FCOM) contained a procedure to be followed in event of this warning, but the flight crew did not apply the procedure. The stall alert should have been reported promptly to the company’s operations department; the overspeed and nacelle overheat should have been reported and entries made in the technical log to enable engineers to carry out appropriate checks.

It was fortunate that the co-pilot reported this serious incident in a sufficiently timely manner to enable preservation of the CVR recording The appropriate airspeed was not maintained during the approach because standard operating procedures were not observed, monitoring was not effective and there was diminished crew cooperation during recovery actions.

The performance of the crew may have been affected by tiredness or fatigue, caused by diminished quality of rest in the period prior to flight duty.