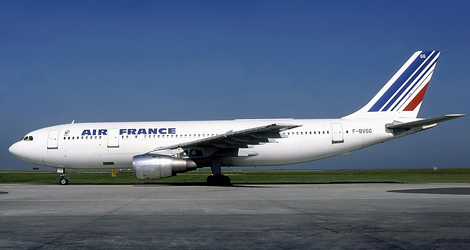 On Wednesday, 17 March 1982 with a slight delay from schedule, the Airbus A300 registrated F.BVGK providing commercial flight Air France flight AF125 from Sana’a to Cairo (Paris being its final destination) initiated its take-off roll at 05.10 a.m. U.T. (08.10 local time).

Air France flight AF125 was cleared to roll for a take-off to the north. The weather conditions were good.

The indicated wind was calm at first, and then 150o/8kt, just before the clearance for take-off.

The operational parameters (resulting from runway characteristics, weather conditions and operating conditions of the day) did not result in any particular limitation and the situation did not call for any remark, until the take-off power was set.

The pilot at the controls was the first officer, seated on the right hand seat.

At about 95 kt, an explosion was felt in the cabin of Air France flight AF125.

In the cockpit the crew perceived a “shimmy” and vibrations. The captain thought that is was a tyre burst and decided to abort take-off.

In fact, the explosion was due to the “uncontained” desintegration of a stage one HPT disk of the RH engine.

The number 2 fire warning immediately sounded, as fuel started to leak through the punctures in the wing tank and ignited.

The fire first spread’ towards the rear part of the aircraft on the right hand side, especially under the line of windows (a long burning torch hung on the engine) ; it was also noted that the APU flamed-out and that the horizontal stabilizer and the tail cone were damaged in some place.

The aircraft came to a stop approx. 1,350 meters from the end of the runway, after a relatively moderate braking, using the thrust reverse (on the LH engine).

The fuel still leaking the fire rapidly developed under the aircraft towards the whole left forward part.

The firemen, who were on the side of the runway during the take-off, reached the aircraft without delay and got the fire under control within a few minutes.

The emergency evacuation of Air France flight AF125 was carried out successfully, mainly with the LH rear slide.

The accident directly resulted from the uncontained explosion of a first stage high pressure turbine disk of the right hand engine. The propagation of a low cycle fatigue crack on one of the embossments of the disk rim was at the origin of the disk fracture.

This cracks, which existed before, had not been detected during the inspection conducted in the operator’s workshops, according to the method defined by the manufacturer and in accordance with the requirements of the airworthiness authority.

The investigations showed that it was necessary, not only to reduce the intervals between the inspections of these disks and conduct two independent sequential inspections, but also to modify the design and make sure they were progressively replaced by the new type.

It seems obvious that the limit life validation methods used at the time of the accident, were still insufficient, as far as the probability of non-detection of cracks was concerned.