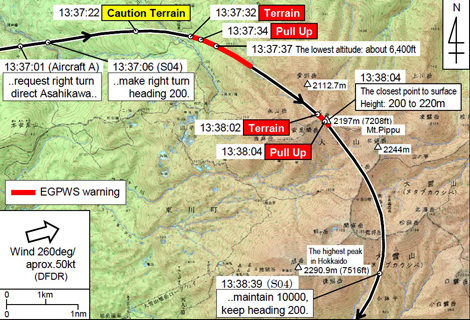 The occurrence of Air Nippon flight ANA325  covered by this report falls under the category of “A case where aircraft crew executed an emergency maneuver during navigation in order to avoid a contact with the ground” as stipulated in Clause 5, Article 166-4 of the Ordinance for Enforcement of the Civil Aeronautics Act of Japan and is classified as an aircraft serious incident.

When the aircraft was descending toward Asahikawa Airport following an air traffic controller’s instructions near the destination aerodrome, its ground proximity warning system (GPWS) issued a warning at about 6,800 ft about 30 km east of Asahikawa City, Hokkaido Prefecture. The aircraft took an emergency maneuver and landed at Asahikawa Airport at 14:05 Japan Standard Time (JST: UTC+ 9hr, unless otherwise stated all times are indicated in JST on a 24-hour clock).

There were 57 persons on board, consisting of the PIC, five other crewmembers, and 51 passengers, but no one was injured.

With the renewed “TERRAIN” and “PULL UP” warnings, the Aircraft A took an evasive maneuver, by rotating up and increased engine thrust. At this moment the Air Nippon flight ANA325 was closest to the peak of Mt. Pippu with an elevation of 2,197 m (7,208 ft). Its height from the ground as recorded on the DFDR and EGPWS was about 200 to 220 m.

It is highly probable that this serious incident occurred because the Aircraft A experienced a ground proximity and its flight crew took an emergency maneuver responding to its EGPWS warnings during its descent toward its destination aerodrome, Asahikawa Airport, under the ATC instructions.

It is probable that the flight crew did not question the air traffic controller about the instructions because: the PIC believed the controller was applying the MVA; the FO gave no advice to the PIC in spite of his VSD based recognition of the approach to the mountainous area.