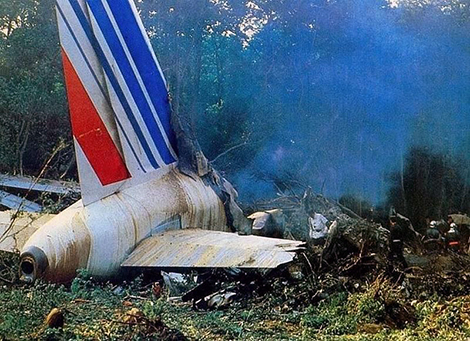 Air France flight AF296 crashed on June 26th 1988, the  Airbus A320-111 registered F-GFKC was performing a series of Air Charters with passengers on behalf of the Mulhouse flying club.

At the start of each of the two round trips, initially planned to the Vosges area, then, for meteorological reasons, to the Alps, the crew was, at the request of the Mulhouse flying club, to overfly the Mulhouse-Habsheim aerodrome as part of the air show organized by this flying club.

The regional Air France delegation at Mulhouse, acting as contact between the organizer of the air show and the carrier Air Charter , had made the administrative preparation for the flight.

In Paris, Air Charter took charge of the commercial aspects, defining the general flight conditions (route, choice of aircraft on the basis of Air France availabilities) and preparing the contract.

Lastly, the technical preparation was undertaken by the “Service Ligne et Régions de la Direction des Opérations d’Air France” who, on the basis of commercial requests, studied the conditions under which the flight was to be performed and prepared the technical file for the crew.

According to the declarations made by the airline, this preparation was made with respect to the specific airline directives (internal note DOND 50420 dated October 19th 1987 shown in appendix), taking into account the obstacles and with a planned low altitude flyover of runway 02.

On completion of this study, on Friday June 24th in the afternoon, the A320 Flight Division, i.e. the department responsible for crew management, received the following file intended for the crew together with verbal comments :

In this documentation, there were no instructions either concerning runway axis or height of overflight

On Sunday morning, June 26th, during their flight preparation, the crew become acquainted with the file .

No verbal comments were made to them.
The flight from Paris-Charles de Gaulle to Basle-Mulhouse was achieved normally.
After a short stop, the aircraft departed shortly before 12 h 30 for the first round trip.
For this flight, the pilot in the left seat was the designated Captain, and he had the controls.

During taxiing, as confirmed by the recording of on-board conversations, he explained in detail the program of the flyby to be made at Habsheim (first overflight at low speed, with landing gear and flaps extended, at a height of 100 feet, then overflight at high speed in clean configuration) .

The intention to make two overflights was transmitted to air traffic control by radio .

Take-off was made at 12h 41, immediately followed by a right turn to reach Mulhouse Habsheim at an altitude of 2000 feet QNH (i.e. a height of approximately 1000 feet above the ground) achieved at 12 h 42.

During the level flight at 1000 feet above the ground, the autothrottle was disengaged to permit manual control of the thrust, and two warning sequences, related to the landing gear retracted configuration and two indications of radio altimeter height less than 1000 feet, were heard.

The motorway was used as the first visual navigation landmark then a track, parallel to the motorway, leading to the Habsheim aerodrome .

At 12h 44, the aircraft left this level flight altitude and descended towards the aerodrome which was identified visually.

The engines of Air France flight AF296 were throttled back. Flap and landing gear were extended at start of descent.

Setting of the pressure at aerodrome level (984 hPa) was made and counterchecked by the two pilots .
The vertical speed during descent was 600 feet per minute .

Confirmation of Habsheim aerodrome identification was made at 450 feet above the ground.

A second aural message “200 feet” interrupted a personal remark made by the First Officer at 12h 45mn 11s .

The First Officer informed the Captain that the aircraft was reaching 100 feet at 12 h 45mn 14s and simultaneously the radio altimeter emitted a “100 feet ” message, the vertical speed still being 600 feet per minute.

The descent continued at a slightly lower rate down to 50 feet , reached 8 seconds after passing through 100 feet agl, then at a very low rate down to 30 to 35 feet above the ground, the aircraft then remaining more or less in level flight.

Throughout the whole descent and at the start of level flight made with engines set to flight idle, the aircraft decelerated and its pitch up increased during the last 25 seconds of flight.

The end of the descent and the level flight were made above runway 34R.

The aircraft touched the trees shortly after the end of the runway at 12h 45mn 40s ; at this time, engine speed was around 83 % N1, the pitch attitude of the aircraft was 14° .

The first contact between the aircraft and the trees was made by the rear section of the fuselage, the tailplane then the engine nacelles and the main landing gear .

The aircraft sank slowly into the forest . The tip of the right wing then the right wing itself broke, fuel was projected forward and fire immediately broke out and penetrated the cabin as soon as the aircraft came to rest.

Evacuation was made immediately via the left side .

The forward left door could not be opened completely because of the trees .

The left aft door opened correctly and the escape slide deployed normally but was perforated by the broken trees as soon as used by the first evacuees.

A woman and two children, including one physically handicapped, died in the fire.

The Commission believes that the accident resulted from the combination of the following conditions :

This combination of conditions led to impact of the aircraft with the trees.

The Commission also believes that if the descent below 100 feet was not deliberate, it may have resulted from failure to take proper account of the visual and aural information intended to give the height of the aircraft .

The Commission also remarked that the following factors contributed towards placing the crew in a situation that they were not able to fully control :

Following the final report, Airbus industrie produced a document “as a response to allegations (direct or implied), made by the French pilot’s union SNPL (Syndicat National des Pilotes de Lignes) and various media, that the A320 was in some way a contributory cause of the accident.”

It is worth reviewing this document, which adds some information to the investigation.