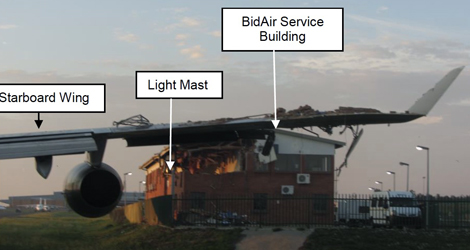 The British Airways flight BA034 , a Boeing B747-400 with registration G-BNLL , was going to embark on a commercial international air transportation long haul flight from FAOR to EGLL.

During the taxi out , instead of turning to the left to follow Bravo taxiway, the crew of British Airways flight BA034 continued straight ahead, crossing the intersection of taxiway Bravo and aircraft stand taxilane Mike.

After crossing the intersection, still being on Mike, the aircraft collided with a building.

An investigation was conducted and several causal factors were determined. Amongst others, it was determined that the crew erred in thinking they were still taxiing on Bravo while in fact they were taxiing on Mike.

This mistake, coupled with other contributory factors such as the briefing information, taxi information, ground movement visual aids, confusion and loss of situational awareness led to the collision.