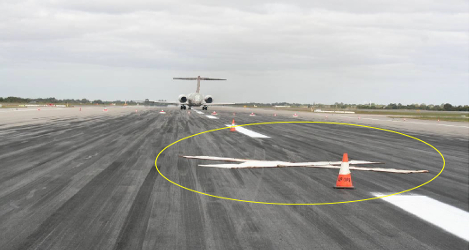 On 9 May 2008, a Boeing Company 737-8CX aircraft, registered PK-GEF, was being operated on a scheduled passenger service between Denpasar, Republic of Indonesia and Perth, WA, as Garuda Indonesia flight GA728.

At about 1140 Western Standard Time1 , the flight crew commenced duty in Denpasar, for a planned departure time of 1240. After the flight crew’s arrival at the aircraft, the company flight operations officer (FOO) provided them with an operational briefing and with the flight documents that were pertinent to the flight. The flight subsequently left the terminal at Denpasar at 1235. On board were two flight crew, six cabin crew and 76 passengers.

The flight crew reported that, once established in the cruise, they reviewed the Notices to Airmen (NOTAMs) for the flight (see Appendix A) and noted that the threshold for runway 21 at Perth was displaced due to runway works.

At about 1530, in preparation for arrival, the Garuda Indonesia flight GA728 crew obtained the Perth Automatic Terminal Information Service (ATIS) and conducted a briefing covering the approach and landing.

At 1557, the approach controller cleared the flight crew to conduct the runway 21 localiser (LLZ) approach .

When Garuda Indonesia flight GA728 was about 15 seconds from touchdown, the flight crew questioned the presence of cars on the runway with the ADC, and conducted a go-around.

On the second approach, the flight crew were again cleared to conduct a runway 21 LLZ approach and, at 1614, the ADC issued the landing clearance, ‘… runway 21, displaced threshold, cleared to land’. The ADC recalled observing the aircraft on what appeared to be an approach to land on the closed section of the runway and, at 1615, instructed the flight crew to go around.

Recorded air traffic services (ATS) audio data revealed that, in the go-around instruction, the ADC provided information to the flight crew that identified where they should land the aircraft.

The flight crew of a departing Fokker 50 aircraft that was holding at taxiway Delta, observed the 737 during the final stages of its approach. The crew recalled that the profile was consistent with what they felt was an aircraft approaching to land in the normal touchdown zone, and that they heard the ADC issue the instruction to go around. They then observed the aircraft fly level over the runway works area at an estimated 30 to 50 ft above ground level (AGL), prior to touching down beyond the displaced threshold. The recorded touchdown time was 1616.

Apart from the standard radio transmissions associated with the aircraft taxiing to its parking position, no further communications were recorded between the flight crew and the ADC or surface movement controller.

The Australian requirements for marking runway thresholds that were displaced for 30 days or less differed from those recommended by the International Civil Aviation Organization (ICAO). When compared with the likely visibility of the ICAO-recommended 36 m closed runway markings, the Australian 6 m markings, as used in this case, increased the difficulty for the crews in locating the precise location of the displaced threshold.

As a result, there was an increased risk of a Garuda Indonesia flight GA728 crew conducting a visual approach to the permanent threshold/touch-down area. The use of the larger–sized crosses, as specified in ICAO Annex 14 Aerodromes, would have been visible to the flight crew much earlier during their approach, allowing additional time for the identification of the closed runway area and displaced threshold. That would have allowed an early adjustment to their approach path, ensuring a stabilised approach and landing.
Despite the relevant Australian requirements allowing for the permanent runway 21 markings to be left in view, the obscuration of those markings, as recommended by ICAO, would have increased the likelihood that the crew would identify the displaced threshold.

It was possible in this instance that, had the flight crew not noticed the vehicles on the runway during the initial landing approach, they may have landed within the runway works area.