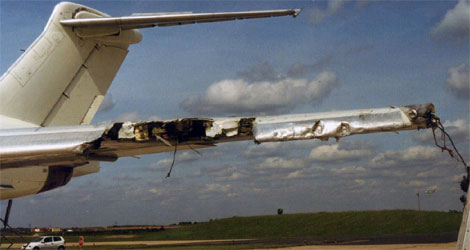 a milestone report, worth reading : t’s arguing about the bad habit in Charles De Gaulle airport ( in all France ? ) of using two languages for radio communications. 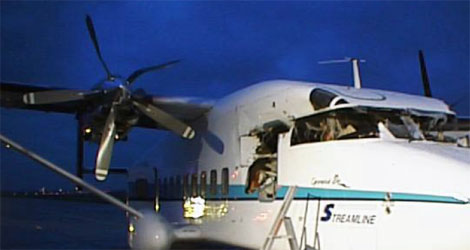 The Shorts 330 registered G-SSWN was then cleared to line up and to wait as “number two”.
The controller believed that the two aircraft were at the threshold of the runway, whereas the Shorts had been cleared to use an intermediate taxiway.
The Shorts entered the runway at the moment the MD 83 was reaching its rotation speed.

The tip of the MD 83’s left wing went through the Shorts 330’s cockpit and hit both pilots. The MD 83 aborted its takeoff.

The accident was caused:

The airplane with 11 crew and 114 passengers aboard was on a LTU flight LT230 from Düsseldorf, Germany, to Saloniki, Greece. At 10501 hrs in Flight Level (FL) 105 during climb the crew noticed a loud bang. Simultaneously, the aircraft began to yaw in combination with...
Read More