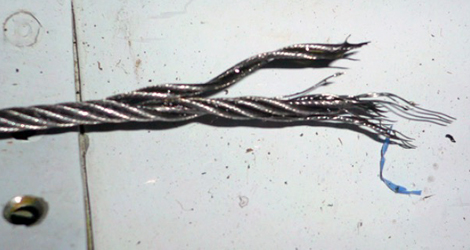 On Thursday 9 August 2007, the DHC6 aeroplane registered F-OIQI was scheduled to fly a public transport flight (QE 1121) between Moorea and Tahiti Faa’a with a pilot and 19 passengers on board.

The flight, with an average duration of 7 minutes, is performed under VFR at a planned cruise altitude of 600 feet.

The following information is derived from the on-board audio recording and witness statements. At 21 h 53 min 22, startup was authorised.

The pilot made the safety announcement in English and in French: “Ladies and Gentlemen, hello and welcome on board. Please fasten your seatbelts”. At 21 h 57 min 19, the air traffic controller cleared the aeroplane to taxi towards holding point Bravo on runway 12.

The aeroplane struck the surface of the sea at 22 h 01 min 20. One minute and eight seconds elapsed between engine power-up and the end of the audio recording. Fourteen bodies were recovered during the rescue operations. Some aeroplane debris, including parts of the right main gear and seat cushions were recovered by fishermen and the rescue team.
Some days later, at a depth of seven hundred metres, a fifteenth body was recovered during operations to recover the flight recorder, both engines, the instrument panel, the front part of the cockpit including engine and flaps controls, the flaps jackscrews and the tail section.

It was noted that the rudder and elevator control cables were broken off in their forward parts and that the elevator pitch-up control cable had, in its aft part, a second failure whose appearance was different from that observed on the other failures that were examined.

The accident was caused by the loss of airplane pitch control following the failure, at a low height, of the elevator pitch-up control cable at the time the flaps were retracted. This failure was due to the following series of phenomena: 

The following factors may have contributed to the accident: 