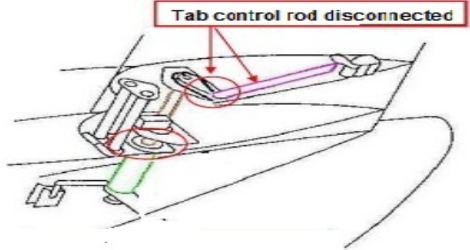 Air Tahiti F-OIQU airplane was on initial climb at a speed of about 170 kt, the captain noticed that the slip indicator ball had travelled to the extreme right. He used the rudder trim as far as the stop to reduce the load on the rudder.

He managed to move the ball half-way back between the centre and the instrument right-hand stop.

Reckoning that his instrument was possibly faulty, he asked the copilot of Air Tahiti F-OIQU airplane to check on the indicator on the right. The latter confirmed the same sideslip information.

Fearing that they might not be able to trim the aeroplane in the event of a failure of engine n°1, the crew of Air Tahiti F-OIQU airplane aborted the flight and landed back at the departure airport. During speed reduction on final, the crew indicated that the sideslip decreased.

The incident occurred due to the incomplete completion and check on a maintenance operation. This generated the undetected failure to reconnect the rudder trim tab.

A combination of the following two factors contributed to this incident: