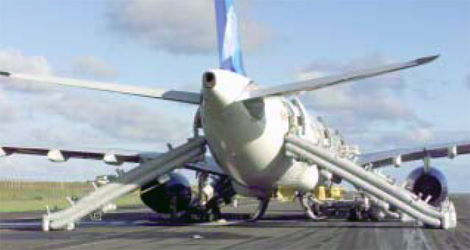 On August 24, 2001, Air Transat Flight TSC236, an Airbus 330-243 aircraft, was on a scheduled flight from Toronto Lester B Pearson Airport, Ontario (CYYZ), Canada to Lisbon Airport (LPPT), Portugal with 13 crew and 293 passengers on board.

The Captain was carrying out the pilot flying (PF) duties for this flight.
Air Transat flight TSC236 was planned to depart CYYZ at 00:10 UTC1, with 47.9 metric tons of fuel, which included a 5.5 tons over and above the fuel required by regulations for the planned flight; the actual take-off time was at 00:52 with a reported 46.9 tons of fuel on board.

According to the crew, the flight progressed normally until after crossing 30º West and at 05:03 when they observed unusual engine oil indications on the Number 2 (right) engine (Rolls-Royce RB211 Trent 772B).

The ENGINE Electronic Centralized Aircraft Monitoring System (ECAM) page was manually selected by the crew, and the oil indications were communicated by high-frequency (HF) radio to the dispatcher at the company’s Maintenance Control Centre (MCC)4 at Mirabel Quebec, Canada.

At approximately 05:33, an advisory ADV message was displayed on the Engine/Warning Display (EW/D).
The crew noticed the ADV and deselected the ENGINE ECAM page.
This action resulted in the Fuel ECAM page being displayed and the crew becoming aware of a fuel imbalance between the left and right inner-wing tanks.
To correct the imbalance, the crew selected the cross feed valve OPEN and the right-wing fuel pumps OFF in order to feed the right engine from the left-wing tanks.

In attempts to resolve the sudden and unexplained reduction in the fuel quantity readings, the crew asked the cabin crew to visually check the wings and engines for a possible fuel leak: the visual check did not reveal any evidence of a fuel leak.

At 05:54, in reaction to the continued abnormally high rate of reduction in the fuel-on-board quantity reading, the crew selected the right-wing fuel pumps to ON and the left-wing pumps to OFF.
These selections established cross feed of the fuel in the right wing tanks to both engines.

The crew then contacted MCC on HF, advising the dispatcher of the inexplicable low fuel quantity readings.

At this time, fuel on board was 4.8 tons, or 12 tons below the planned quantity.
The crew reported that they could not determine what the problem was, that the fuel indication was continuing to reduce, and that the apparent fuel leak was happening in the right-wing inner tanks.

At 05:59, during the dialog with MCC, the crew reported that the fuel quantity had further reduced to 1.0 tons in the right tanks and 3.2 tons in the left tanks.

MCC asked whether the fuel loss might be a leak in the left engine. In reaction to this suggestion, the Captain momentarily reselected cross feed from the left tanks.

The crew stated that all fuel pumps were selected ON when the fuel remaining was 1.1 tons.
At 06:13, when the aircraft was at FL390 and 150 miles from Lajes, the right engine flamed out.

The crew notified Santa Maria control that the engine had flamed out and that the flight was descending.

At 06:15, the crew reported to air traffic control that the fuel on board had reduced to 600 kilograms.
At 06:23, the First Officer declared a “Mayday” with Santa Maria Oceanic Control, and at 06:26, when the aircraft was 65 nautical miles from the Lajes airport and at an altitude of about FL 345, the left engine flamed out.
The ALL ENG FLAME OUT procedure was completed by the crew and an engines-out descent profile was flown towards Lajes.
At 06:31, the flight was transferred to Lajes Approach Control. Assisted by radar vectors and flashing of the runway lights, the aircraft arrived about 8 miles off the approach end of runway 33 at approximately 13 000 feet on a track of about 270°.

The Captain advised Lajes that he was conducting a left 360-degree turn in order to lose altitude.
During the turn, the aircraft was configured with leading-edge slats out and landing gear down for the landing.
S-turns were conducted on final to lose additional altitude.
At 06:45, the aircraft crossed the threshold of runway 33 at about 200 knots, touched down hard 1 030 feet down the runway, and bounced back into the air.
The second touchdown was at 2 800 feet from the approach end of the runway, and maximum braking was applied.
The aircraft came to a stop 7 600 feet from the approach end of the 10 000-foot runway.

After the aircraft came to a stop, small fires started in the area of the left main-gear wheels, but these fires were immediately extinguished by the crash rescue response vehicles that were in position for the landing.
The Captain ordered an emergency evacuation. Fourteen passengers and two cabin-crew members received minor injuries, and two persons received serious injuries during the emergency evacuation.

The aircraft suffered structural damage to the fuselage and to the main landing gear.

The Captain’s handling of the aircraft during the engines-out descent and landing was remarkable given the facts that the situation was stressful, it was night time, there were few instruments available, pitch control was limited, and he had never received training for this type of flight profile.