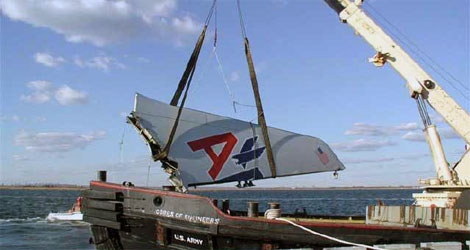 The airplane’s vertical stabilizer and rudder separated in flight and were found in Jamaica Bay, about 1 mile north of the main wreckage site.
The airplane’s engines subsequently separated in flight and were found several blocks north and east of the main wreckage site. All 260 people aboard the airplane and 5 people on the ground were killed, and the airplane was destroyed by impact forces and a postcrash fire.

Flight 587 was operating under the provisions of 14 Code of Federal Regulations Part 121 on an instrument flight rules flight plan. Visual meteorological conditions prevailed at the time of the accident.

The National Transportation Safety Board determines that the probable cause of this accident was the in-flight separation of the vertical stabilizer as a result of the loads beyond ultimate design that were created by the first officer’s unnecessary and excessive rudder pedal inputs.
Contributing to these rudder pedal inputs were characteristics of the Airbus A300-600 rudder system design and elements of the American Airlines Advanced Aircraft Maneuvering Program.