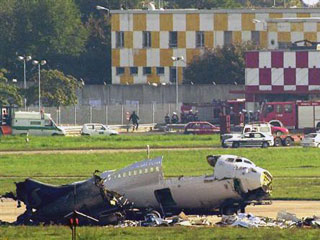 SAS flight SK686 accident took place on the 8th of October 2001, at 06.10 UTC, a Boeing MD-87, registration marks SE-DMA operated by SAS, while on takeoff run on runway 36R of Milano Linate airport, collided with a Cessna 525-A, registration marks D-IEVX which taxied into the active runway. After the collision the MD-87 continued traveling down the runway, the aircraft was airborne for a short while, and came to a stop impacting a baggage handling building. The Cessna 525-A, which was coming from West apron (General Aviation), remained on the runway and was destroyed by post-impact fire.
All occupants of the two aircraft and four ground staff working inside the building suffered fatal injuries. Four more ground staff suffered injuries and burns of various entity.

After analysis of evidence available and information gathered, it can be assumed that the immediate cause for the accident has been the runway incursion in the active runway by the Cessna.
The obvious consideration is that the human factor related action of the Cessna crew – during low visibility conditions – must be weighted against the scenario that allowed the course of events that led to the fatal collision; equally it can be stated that the system in place at Milano

The following list highlights immediate and systemic causes that led to the accident:

• the visibility was low, between 50 and 100 meters;
• the traffic volume was high;
• the lack of adequate visual aids;
• the Cessna crew used the wrong taxiway and entered the runway without specific clearance;
• the failure to check the Cessna crew qualification;
• the nature of the flight might have exerted a certain pressure on the Cessna crew to commence the flight despite the prevailing weather conditions;
• the Cessna crew was not aided properly with correct publications (AIP Italy – Jeppesen), lights (red bar lights and taxiway lights), markings (in deformity with standard format and unpublished, S4) and signs (non existing, TWY R6) to enhance their situational awareness;
• official documentation failing to report the presence of unpublished markings (S4, S5, etc) that were unknown to air traffic controllers, thus preventing the ATC controller from interpreting the unambiguous information from the Cessna crew, a position report mentioning S4;
• operational procedures allowing high traffic volume (high number of ground movements) in weather conditions as were current the day of the accident (reduced visibility) and in the absence of technical aids;
• radio communications were not performed using standard phraseology (read back) or were not consistently adhered to (resulting in untraced misunderstandings in relevant radio communications);
• radio communications were performed in Italian and English language;
• Air Traffic Control (ATC) personnel did not realize that Cessna was on taxiway R6;
• the ground controller issued a taxi clearance towards Main apron although the reported position S4 did not have any meaning to him;
• instructions, training and the prevailing environmental situation prevented the ATC personnel from having full control over the aircraft movements on ground.