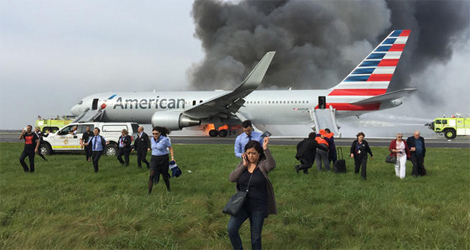 American Airlines flight AA383 , from Chicago O’Hare to Miami, FL , operated with a Boeing B767-300 (N-345AN) stopped on the runway during takeoff roll, caught fire and evacuated the passengers.

American Airlines flight AA383 had 161 passengers and 9 crew on board, during the evacuation seven passengers and one flight attendant received minor injures and were taken to hospitals.

During the takeoff roll on runway 28R in Chicago O’Hare, at 14:50 Local Time (19:50Z) , the crew of American Airlines flight AA383 rejected takeoff at high speed reporting “stopping on the runway“.

A large fire was seen from the right hand wing of American Airlines flight AA383 with a plume of smoke.

Evacuation on the runway was carried out via slides. Fuselage skin of the airplane melted , most of it is  burned and the aircraft has substantial damage.

The HPT stage 2 disk of American Airlines flight AA383 initially separated into two fragments. One fragment penetrated through the inboard section of the right wing, severed the main engine fuel feed line, breached the fuel tank, traveled up and over the fuselage, and landed about 3,000 ft away. The other fragment exited outboard of the right engine, impacting the runway and fracturing into three pieces.

The National Transportation Safety Board determines that the probable cause of this accident was the failure of the high-pressure turbine (HPT) stage 2 disk, which severed the main engine fuel feed line and breached the right main wing fuel tank, releasing fuel that resulted in a fire on the right side of the airplane during the takeoff roll.

The HPT stage 2 disk failed because of low-cycle fatigue cracks that initiated from an internal subsurface manufacturing anomaly that was most likely not detectable during production inspections and subsequent in-service inspections using the procedures in place. Contributing to the serious passenger injury was (1) the delay in shutting down the left engine and (2) a flight attendant’s deviation from company procedures, which resulted in passengers evacuating from the left overwing exit while the left engine was still operating.

Contributing to the delay in shutting down the left engine was (1) the lack of a separate checklist procedure for Boeing 767 airplanes that specifically addressed engine fires on the ground and (2) the lack of communication between the flight and cabin crews after the airplane came to a stop.