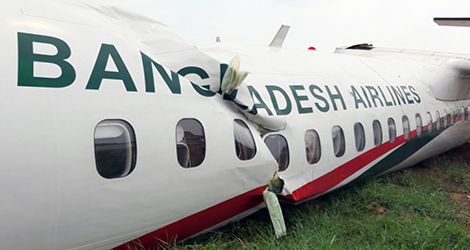 Biman Bangladesh Airlines flight BG060 was operating flights from DAC to RGN and back to DAC.

Due to adverse weather, Yangon control tower asked them to execute a go-around and the aerodrome operations was closed for the aviation safety for 2 hours.

When the weather condition got better, the aerodrome operations was opened.

Biman Bangladesh Airlines flight BG060, registered S2-AGQ made RNP approach because only localizer was available at that moment.

While the Bombardier DHC-8-402 aircraft was and making approach to runway 21, it was a bit higher than on slope 3 degree and landed on runway 21, remaining on the ground for upwards of 7 seconds. 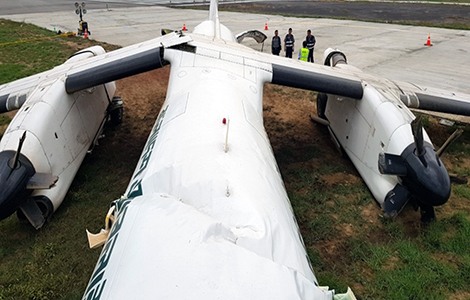 The aircraft ran parallel to the runway, and then it flew up in the air up to 44 ft above the ground and sank again and collided with runway 03 and slid forward out of the runway and came to a complete stop on the over-run of the runway 03.

There was no fire.

All gears were collapsed and fuselage was broken into three sections.

From the evidence available, the following findings are made.

These findings should not be read as apportioning blame or liability to any particular organization or individual:

Primary Cause While the aircraft was unstablized on approach, the pilot did not execute a go-around.

On 16 July 2010 at South African Express Airways flight SA1107, a de Havilland Dash 8 with registration ZS-NLY, collided with a wild animal (aardvark/anteater) shortly after touchdown on runway 20 at Kimberley aerodrome. The accident occurred at night. The impact was...
Read More