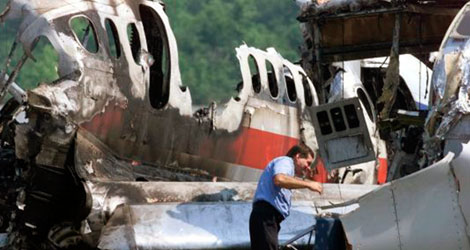 American Airlines flight AA1420 departed from Dallas/Fort Worth International Airport, Texas, about 2240 with 2 flight crewmembers, 4 flight attendants, and 139 passengers aboard and touched down in Little Rock at 2350:20.

After departing the end of the runway, the airplane struck several tubes extending outward from the left edge of the instrument landing system localizer array, located 411 feet beyond the end of the runway; passed through a chain link security fence and over a rock embankment to a flood plain, located approximately 15 feet below the runway elevation; and collided with the structure supporting the runway 22L approach lighting system.

The captain and 10 passengers were killed; the first officer, the flight attendants, and 105 passengers received serious or minor injuries; and 24 passengers were not injured. The airplane was destroyed by impact forces and a postcrash fire.

The National Transportation Safety Board determines that the probable causes of this accident were the flight crew’s failure to discontinue the approach when severe thunderstorms and their associated hazards to flight operations had moved into the airport area and the crew’s failure to ensure that the spoilers had extended after touchdown.