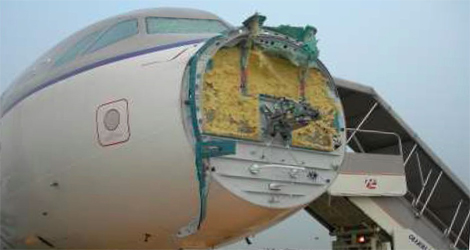 On June 9, 2006, about 17:40, Asiana Airlines flight OZ8942 , an Airbus 321-100 (Registration HL7594), enroute from Jeju Airport to Gimpo Airport, encountered a thunderstorm accompanied by hailstones around 20 miles southeast of Anyang VOR at an altitude of 11,500 ft during descending to approach Gimpo Airport.

At the time of the accident, one captain, one first officer, 4 cabin crew and 200 passengers were on board, and no one sustained injuries while the radome in the nose section of the aircraft was detached and the cockpit windshield was cracked.

On the day of the accident, the flight crew were scheduled for two round-trip flights between Gimpo and Jeju Airports departing from Gimpo Airport at 11:50.

And at the time of the accident, the aircraft was on the final leg to Gimpo Airport after departing from Jeju Airport about 17:05. According to the radar track and Cockpit Voice Recorder recordings, when Asiana Airlines flight OZ8942 was flying along route B5763 to Gimpo Airport after taking off from Jeju Airport, at 17:30:53, the controller in ATC Air Traffic Center instructed flight 8942 to fly heading 040 ° for the separation from the other aircraft around 30 NM south of NUMNDA, and at 17:32:08, instructed the flight to fly directly to NUMNDA in order to reenter route B576.

At 17:33:05, the flight crew requested heading 030 ° to avoid clouds during a turn to NUMDA, and the controller gave permission.

At 17:38:33, Asiana Airlines flight OZ8942 started to shake as it was passing through an area at an altitude of about 13,000 ft, and the cabin crew announced to check passenger seat belts fastened.

At 17:39:26, flight 8942 was given permission to turn left to 330 °, and during the turn, it encountered with a hailstorm for 36 seconds from 17:40:02 until 17:40:38. After the encounter with the hailstorm, the radome located in the front section of the aircraft was detached, and the surface of windshield was cracked to the extent that the flight crew were not able to discern the foreview.

The flight crew of Asiana Airlines flight OZ8942 manually attempted to approach and land on runway 14R of Gimpo Airport twice following the radar vectoring of the approach controller, but went around due to its difficulty in safe landing.

About 18:13, they made a successful and safe landing on the third approach attempt.