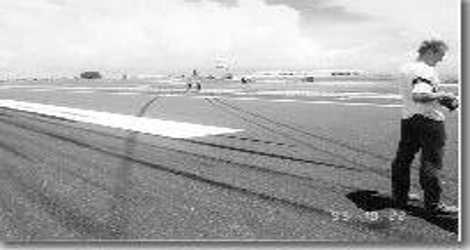 The flight was conducted on a Dornier 228-212K, registration 9M-PEQ with two pilots, a cabin attendant and five passengers on board. Passengers were seated between rows 4 and 6 inclusive.

The flight was cleared for an ILS approach to Male’ International Airport, at 0433Z. The flight obtained clearance to land on runway 36, (reported wind 270/11 knots) at 0443Z.

The Air Maldives flight L63312 from Kadhdhoo to Male’ was uneventful until landing, and during the flight both pilots were in good spirits.

The aircraft landed at about 90-95 knots and touch down about 600m beyond the threshold of the runway 36, about 20° to the centre line; to the left of the centre line.

On touch down the aircraft moved to the left of the centre and at the nearest point was 2.7 m from the edge.

The handling pilot (Co-pilot) applied right rudder to get the aircraft onto the centre line and then tried to get the power levers to ground idle.

The Air Maldives flight L63312 abruptly turned to the right and veered off the runway, traversing through the sand and the grass and crashed on to the sea wall at an angle at which point the nose was pointing approximately E/SE.

The aircraft lay about 78m from the sea wall (measured parallel to the centre line).

The accident occurred in day light in good visibility. The local time was 0944 (0444Z).

According to the investigation of Air Maldives flight L63312 conducted and information obtained the following factors played a part in causing the accident :