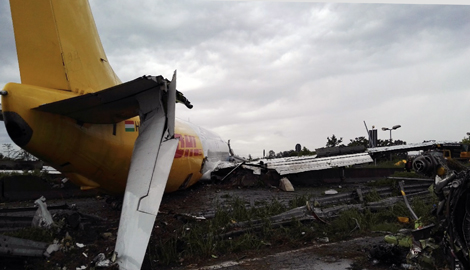 ASL Hungary flight FAH7332 departed at 00.54’ UTC for a 73 minutes flight to Bergamo Orio al Serio (LIME), where the crew was instructed by ATC to perform an ILS9 approach RWY 28.

During deceleration broke through the localizer antennas and the airport fence.

The landing gear and both engines separated from the main body and the aircraft came to a complete rest at about 520 meters beyond the runway end. The crew deployed the emergency slide and evacuated the aircraft using the right front door.

They were assisted by the medical team and carried to the hospital for further treatment. Firefighting rescue team reached the accident site within three minutes from the emergency call.

The preliminary analysis of DFDR highlighted that over the threshold RWY 28 the aircraft was at 140 feet AGL and 156 knots.

During flare, the aircraft floated for approximately 14 seconds between 30 feet and 20 feet, maintaining a constant airspeed close to 155 knots before touching down. The approximately 750 meters of the remaining runway did not allow to stop the aircraft, which trespassed the airport fence at approximately 109 knots.