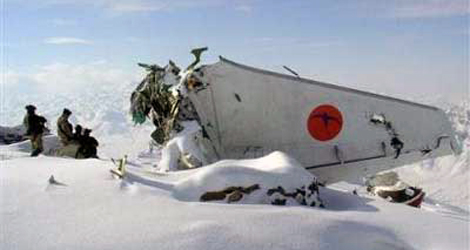 On February 3, 2005. a Boeing 737-242 aircraft with Kyrgyz Republic registration EX·037 . operated by Phoenix Aviation , was conducting Kam Air flight RQ904 from Herat to Kabul. There were a total of 105 occupants on board the Aircraft , including eight crew members and ninety-seven passengers.

Kam Air flight RQ904 was cruising at night level 270 when it contacted Bagram Radar Approach Control (“Bagram”) for descent and landing. The night was normal until it failed to level at flight level 130 during the VOR/DME approach.

At 1043:24 UTC, Bagram cleared the flight to descend at its discretion and to expect the VOR approach to runway 29. The prevailing weather was also passed on to the Aircraft. Visibility was reported 2 kilometers with snow, ceiling 2200 feet broken, wind calm and altimeter setting QNH 1016.

At 1043:58 UTC, when the Aircraft was 35 miles west of the Kabul VOR. radar contact was established with Bagram. Kam Air flight RQ904 was advised by Bagram t0 cross the VOR at or above flight level 130 and cleared it for the VOR/DME approach to runway 29.

At 1048:41 UTC Kam Air flight RQ904 reported flight level 130. Bagram again cleared the Aircraft for the VOR approach to runway 29 and advised the Aircraft to report procedure turn inbound. The crew replied that they would report proceeding inbound for the VOR approach to runway 29, This was the last transmission from Kam Air flight RQ904.

At about 1050:11 UTC, Bagram stated that radar contact had been lost with the Kam Air flight RQ904.

Bagram and Kabul Air Traffic Control Tower attempted to locate the Aircraft through radar and radio communication, but were not successful.

Search for the Aircraft was delayed and hampered due to a severe snowstorm in the region.

All 105 occupants on board the Aircraft had received fatal injuries. Subsequently, all bodies were recovered and identified .

No FDR or CVR data read out from Kam Air flight RQ904 was available.

Based on the very limited information available , the following findings have been drawn .

Probable Cause : the accident occurred probably due to the premature descent by the Aircraft below its minimum assigned altitude of 13,000 feet during approach in weather conditions below VFR requirements. The reason for descending below the minimum altitude could not be determined due to inadequate evidence .