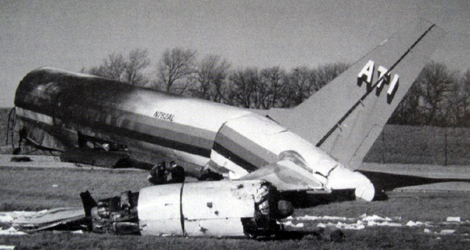 On Thursday, February 16, 1995, at 2027 central standard time, a Douglas DC-8-63, N782AL, operated by Air Transport International, was destroyed by ground impact and fire during an attempted takeoff at the Kansas City International Airport, Kansas City, Missouri. The three flight crewmembers were fatally injured.

The flight was being conducted as a ferry flight under Title 14 Code of Federal Regulations Part 91.

According to the CVR transcript and the sound spectrum analysis, during this first attempted takeoff, the power on the asymmetric engine was advanced so that full power on the asymmetric engine was obtained at around 100 knots, about 7 knots below the stated but incorrect Vmcg speed of 107 knots. The engine pressure ratio (EPR) of 1.5 was called 1 second before the airspeed alive (about 50 to 60 knots) call was made; followed by a call of 1.6 EPR, 1 second before the 80 knots call. Then, 90 knots was called, followed 1 second later by the 1.8 EPR (the target takeoff EPR was 1.91). One hundred knots was called 1 second later, followed by the sound of decreasing engine power, indicating the start of the rejected takeoff.

Shortly after the first officer called airspeed alive, there was an abrupt turn to the left, followed quickly by a correction to the right. After the first officer called “90 knots,” the airplane started to turn left again. Following the 100 knot call, the FDR revealed a pitch change, indicating that the pilot rotated the airplane about 20 knots before the target rotation speed of 123 knots.

During the second takeoff, the left drift continued, and the first officer was heard calling, “we’re off the runway.”

A directional control correction was initiated, and the pitch attitude increased just as the airplane became airborne. The airspeed reached between 120 and 123 knots. This is just about Vmca (minimum control speed air) and is also about the stall speed for that airplane weight.

The impact occurred as the airplane rolled to a nearly 90 degree left bank.

The National Transportation Safety Board determines that the probable causes of this accident were: