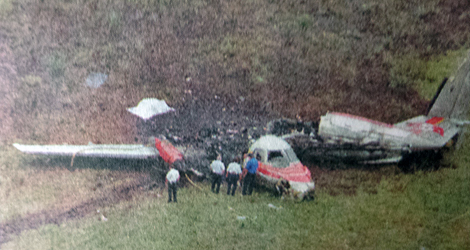 The airplane then crashed during an emergency landing near Carrollton, Georgia, about 31 minutes after departing the Atlanta Hartsfield International Airport, Atlanta, Georgia.
The flight was a scheduled passenger flight from Atlanta to Gulfport, Mississippi, carrying 26 passengers and a crew of 3, operating according to instrument flight rules, under the provisions of Title 14 Code of Federal Regulations Part 135.

The flightcrew declared an emergency and initially attempted to return to Atlanta. The flightcrew then advised that they were unable to maintain altitude and were vectored by air traffic control toward the West Georgia Regional Airport, Carrollton, Georgia, for an emergency landing.

The airplane continued its descent and was destroyed by ground impact forces and postcrash fire.
The captain and four passengers sustained fatal injuries. Three other passengers died of injuries in the following 30 days.

Because of the severely degraded aircraft performance following the propeller blade separation, the flightcrew’s actions were reasonable and appropriate during their attempts to control and maneuver the airplane throughout the accident sequence, and they were not a factor in this accident.

The National Transportation Safety Board determines that the probable cause of this accident was the in-flight fatigue fracture and separation of a propeller blade resulting in distortion of the left engine nacelle, causing excessive drag, loss of wing lift, and reduced directional control of the airplane.

The fracture was caused by a fatigue crack from multiple corrosion pits that were not discovered by Hamilton Standard because of inadequate and ineffective corporate inspection and repair techniques, training, documentation, and communications.

Contributing to the accident was Hamilton Standard’s and FAA’s failure to require recurrent on-wing ultrasonic inspections for the affected propellers.