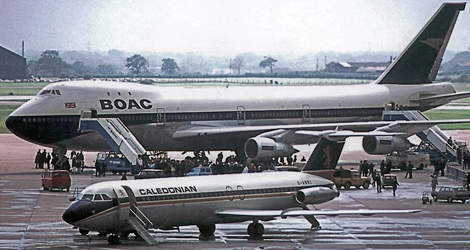 The aircraft was operating as British Airways flight BA888 (British Airways Overseas Division – BAOD) scheduled passenger service BA888 from London to Melbourne via Bahrain, Bangkok and Kuala Lumpur. The flight crew, consisting of the commander, co-pilot and flight engineer had taken the aircraft over at Bahrain after a 24 hours lay-over from the previous day’s service. (In BAOD Terminology the flight engineer is called the engineer officer). The aircraft had departed Bangkok at 1040 hrs and after an uneventful flight at flight level (FL) 330 made an approach to land on Runway 15 at Kuala Lumpur International Airport, it being flown manually by the commander.

The approach of British Airways flight BA888 was being made in visual meteorological conditions but the commander had elected to carry out the instrument approach procedure based on the Very High Frequency, omni-directional radio range (VOR). The relevant approach procedure plate, as used by BAOD is at Appendix 1. Before descent from cruising altitude the commander had briefed the co-pilot and flight engineer on the procedure. The VOR (call sign VBA) is 12.4 nm from the threshold of Runway 15 and is offset about 1 nm to the north of the extended centre-line of the runway. 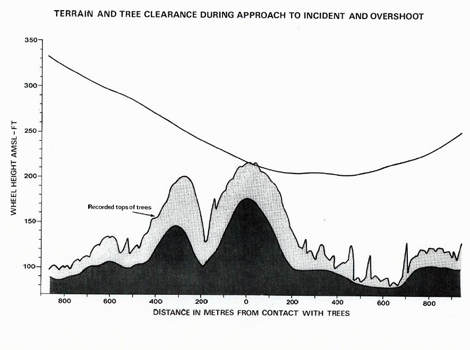 The approved procedure requires the aircraft to cross VBA at or above 2,000 feet (QNH) and then to track out on the 1580 radial descending towards the NM medium frequency locator beacon, which is on the runway centre-line approximately 4 nm from the threshold. If visual contact with the ground is established at the decision height of 860 feet (QNH) over NM then 860 feet is maintained in level flight until intercepting the nominal glide path, as defined by VASI or by visual estimation.

If not visual at 860 feet over NM the aircraft overshoots and proceeds according to its ATC clearance.

Approaching VBA in descent from cruising level both pilots of British Airways flight BA888 set the Kuala Lumpur QNH of 1012 mbs on their pressure altimeters and also set the indices on the pressure altimeters to the decision height of 860 feet in accordance with BAOD procedures. They also set the indices on their radio altimeters to 791 feet, this value is derived by subtracting the runway threshold elevation of 69 feet from the decision height of 860 feet.

With this setting the radio altimeter audio warning should have started approximately 75 feet above 791 feet and continued with an increasing amplitude down to 791 feet which, over level terrain, would coincide with 860 feet on the pressure altimeters. As the aircraft crossed VBA at 2,000 feet tracking out on 1580 (M) the runway lights were clearly visible to the flight crew, and about this time the commander called for the landing checks.

Wingflaps were extended progressively to 1, 5 and finally to 10 and when British Airways flight BA888 had descended to about 1,000 feet the flight engineer made a warning call of ‘no flags, 10 flap set’. The aircraft levelled off at about this time and almost simultaneously the radio altimeter decision height audio warning began and was apparently much louder and persisted for much longer than the crew had anticipated. During the period that the audio warning was operating the commander stated that he called for landing gear down and 20 flaps. The landing gear lever was selected down but one of the landing gear warning lights became dislodged from its holder. This caused an interruption of the flight engineer’s drills whilst he verified the door status from the systems panel. Neither the co-pilot nor flight engineer heard the call for 20 flap and consequently it was not selected; the commander was not aware of this but he did not query why the actioning response was not repeated back to him.

Airspeed of British Airways flight BA888 had been excessive throughout the approach. The failure to extend 20 flaps exacerbated the situation so that as the aircraft approached NMthe commander was faced with the necessity of aligning the aircraft with the runway, maintaining height , and reducing airspeed.

From this point, about two miles before NM, the crew’s recollection of events is fragmentary and confused. The commander stated that he was flying the aircraft by reference to attitude, speed and rate of descent but he could not recall any power settings. Despite the requirement to hold decision height until intercepting the visual glide path, descent restarted before NM but neither the commander nor the other two flight crew members, appear to have been aware of the premature loss of height or of a significant rate of descent.

Just after passing NM at a speed of about 170 knots the commander called for 25 flaps. This was twice queried by the co-pilot as ’25 from 10?’ because of the missing intermediate 20 flap call and also because the airspeed was close to the limiting speed for 25 flap. There was, however, no response from the commander. During this period of time the flight engineer was completing the landing check list, the co-pilot was operating the radio and both were monitoring the 25 flap extension. The commander recalled that on looking up after an instrument scan the runway lights had disappeared;

…at about this same time the co-pilot of British Airways flight BA888 noticed that his radio altimeter was reading about 150 feet and called urgently “100 feet above ground level”.

Aircraft systems, flying controls and handling characteristics were checked. All indications were normal but as a precautionary measure the airport fire and rescue services were requested to stand by. The commander then elected to land on Runway 33 and asked for the Standard VASI to be switched on. He carried out the KL NOB let-down procedure and made an uneventful landing on Runway 33 with the airport emergency services in close attendance.

Inspection of the aircraft after landing showed evidence of engine and landing gear damage consistent with the aircraft having hit the tops of trees.

The let down procedure flown by the commander was not well planned and the published profile was not correctly followed. The operators recommended handling techniques, recommended speeds and flap configurations for this procedure were not observed.

The accident was caused by insufficient monitoring of the aircraft flight path by the crew during the transition from a let-down procedure to the visual phase of a landing approach at night. Inadequate planning and a poor execution of the approach by the commander coupled with an approach procedure which did not allow a stabilized approach, and possibly tiredness were contributory factors.

Northern Executive Aviation flight NEX4B , a Learjet 35A registered G-MURI took off from Manchester UK on 2 May 2000 at 9 h 35, for a positioning flight to Farnborough. The flight took forty minutes. At 11 h 22, it left Farnborough bound for Nice as flight number...
Read More