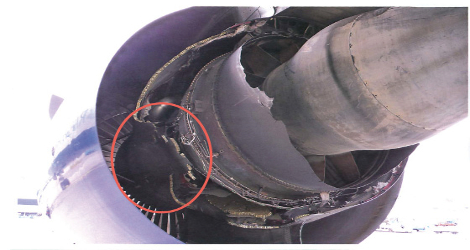 British Airways flight BA16 was operated with a Boeing B777-236 in service from Singapore International Airport to London on June 14th 2010.

On departure from Singapore International Airport a number of EICAS (Engine Indicating and Crew Alerting System) messages were displayed for the right engine. During the climb the crew of British Airways BA16 interrogated the system and established that the event had been transient and that it was safe to continue en route.

With both engines apparently running normally, as the aircraft climbed through 10,000 ft the commander disconnected the autothrottle and selected full thrust as a ‘confidence and troubleshooting’ check. Full rated thrust was achieved, although N1 was higher on the right engine.

During the British Airways flight BA16 there were further events associated with the right engine, showing increased fuel consumption and the crew elected to divert to Amsterdam, Netherlands, transmitting a PAN PAN message.

The crew of British Airways BA16 elected to divert to Amsterdam International Airport, Netherlands, primarily because the weather was excellent, multiple runways were available and the aircraft would arrive with about 2,000 kg above minimum reserve fuel, thus allowing for contingencies. Having established that rated thrust was available from the right engine, a standard Flap 25 landing was planned. As the crew did not know how many track miles remained or which runway to expect prior to establishing contact with Amsterdam ATC, and any delay caused by ATC or a latent technical problem might have resulted in landing below reserve fuel, they transmitted a PAN on initial contact. The aircraft landed without further incident, using idle thrust reverse, at 0511 hrs on 15 June 2010.

After the aircraft landed safely it was found that the right aft inner nacelle was severely damaged and largely missing, with further minor airframe damage and this matched items of nacelle recovered from the runway at Singapore, but not yet identified. Examination indicated that the nacelle damage was due to thermal disbond originating from the HP3 duct area. There have been a number of separate but similar events in other airlines and the airframe manufacturer has issued a series of Service Bulletins to reduce the rate of occurrence. 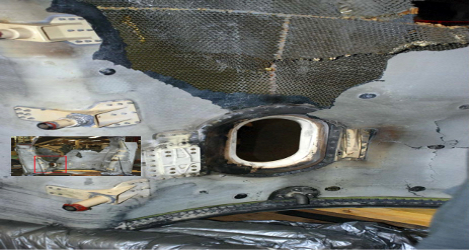 Following the initial investigations at Amsterdam and in the United Kingdom, the significant items from the failed duct on G-YMMP were despatched to the USA for more detailed investigation at the airframe manufacturer.

During this examination the manufacturer identified several locations with clear indications of thermal exposure and disbond. Of those, the location of greatest interest was around the drag link fitting, immediately above the HP3 cutout . This was among the more discoloured areas, and it was clearly included in the disbonded region of the panel. The discolouration of other areas of the inner wall was evidence of overheating at those locations, but the manufacturer reported that discolourations outside the disbond region associated with the panel collapse were ‘unlikely to be implicated in the failure of the panel. This was consistent with the manufacturer’s initial assessment at Amsterdam

The manufacturer further noted significant characteristics of the disbonded surface. These included areas with low bond strength, as evidenced by small fillet scars and/or adhesive failure between the honeycomb core and the facesheet, and a region of significantly overheated adhesive between the drag links next to the HP3 cutout.

The occurrence of Vietnam Airlines flight HVN950 covered by this report falls under the category of “Flames in the designated fire zone of an engine” as prescribed in Clause 10, Article 166-4 of the Civil Aeronautics Regulations of Japan, and is classified as a...
Read More