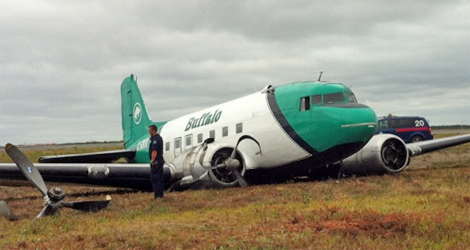 Buffalo Airways Ltd. (Buffalo Airways) has a walk-in / on-demand system whereby passengers can arrive to board a plane without having to pre-book a seat on the flight. If the passenger/cargo load exceeds the capacity of 1 aircraft, an additional aircraft can be dispatched. On 19 August 2013, the occurrence flight, Buffalo 168 (BFL168), was supplemented by another DC-3C for the flight from Yellowknife, Northwest Territories (CYZF), to Hay River, Northwest Territories (CYHY).

Passengers and their baggage were not weighed at the check-in counter. After the aircraft had been loaded, 4 last-minute passengers were boarded along with their luggage.

At the time of departure, the operational flight plan (OFP) was partially completed and did not reflect the number of passengers on board or the weight of the cargo.

The crew did not receive a cargo manifest prior to departure.

At 1708 Buffalo airways flight BFL168 received take-off clearance from the Yellowknife tower controller and initiated the take-off run from Runway 16 at the intersection of Runways 16/34 and 10/28 .

The runway distance available from the intersection was approximately 5956 feet.

An emergency engine shut-down was performed, which included feathering the right propeller.

As the right propeller was moving towards a feathered condition, it stopped feathering before reaching the full feathered position and returned to windmilling. BFL168 made a low-altitude right turn in an attempt to reach Runway 10 .

While manoeuvering, BFL168 struck a stand of trees, about 30 feet in height, 690 feet southwest from the threshold of Runway 10. The initial point of ground contact was 400 feet beyond the trees.

BFL168’s wreckage trail was parallel to and south of Runway 10 and was about 330 feet in length. The landing gear and the flaps were in the retracted position. Due to the relatively low-energy impact, the emergency locator transmitter (ELT) did not activate.

Airport rescue and fire-fighting (ARFF) personnel were positioned south of Runway 10 due to an unrelated ground vehicle recovery operation. The tower controller directed ARFF to the occurrence site at approximately 1718.

ARFF sprayed the aircraft with fire retardant foam as a precaution. The crew and passengers, none of whom were injured, remained at the site under the supervision of ARFF for approximately 60 minutes.

They were subsequently transported back to the Buffalo Airways terminal building.