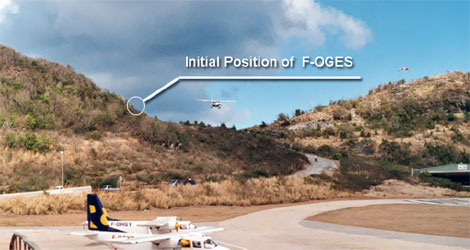 Caraibes Air Transport flight TX1501 : on Saturday 24 March 2001, the DHC-6-300 registered F-OGES was carrying out the scheduled service TX 1501 under a VFR flight plan between the island of Saint-Martin and the island of Saint-Barthélemy, nineteen nautical miles away.

The aircraft was operated by Caraïbes Air Transport, on behalf of Air Caraïbes which undertakes commercial operations on the route.

The Captain was pilot flying.

Cruise was performed at about 1,500 feet. The crew left the Saint-Martin Juliana aerodrome frequency when abeam of the island of Fourchue, the entry point of the aerodrome circuit located three nautical miles north-west of the island of Saint-Barthélemy. A few seconds later, they announced, on the Saint-Barthélemy Information frequency, that they were passing the “Fourchue” reporting point.

Shortly afterwards, they announced passing the “Pain de Sucre” reporting point for a final approach to runway 10.
That was their last communication.

When the aircraft began its short final before the La Tourmente pass, several people, including the AFIS agent, saw it turn left with a steep bank angle then dive towards the ground. It crashed near a house and caught fire.

several people, including AFIS agent saw it turn left with a steep bank angle then dive towards the ground.

All of the occupants perished, along with one person who was in the house.

The investigation could not exclude three other hypotheses which can nevertheless be classified as quite unlikely:

The Captain’s lack of recent experience on this airplane type, the undeniable difficulty of conducting an approach to runway 10 at Saint-Barthélemy and the pressure of time during this flight were contributory factors.

The low height at which the loss of control occurred was an aggravating factor.