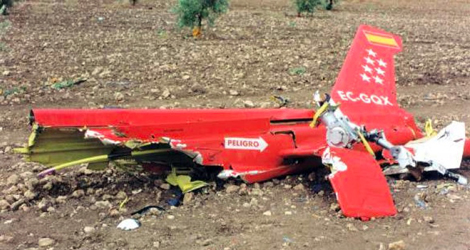 The helicopter, Helisureste EC-GQX which was used for medical evacuation with operations based in Las Rozas (Madrid), had flown to the operator’s maintenance base , in San Vicente del Raspeig (Alicante), on 23rd July 1999, and once there had been subject to a maintenance inspection after having reached 300 flying hours during 24th and 25th July, the day on which it had been declared airworthy after the maintenance.

The helicopter Helisureste EC-GQX took off from San Vicente del Raspeig around 4:45 h UTC on 26th July 1999, with the intention of flying to the operations base in Las Rozas.

The pilot of Helisureste EC-GQX  was the only person on board.

At around 6:00 h UTC (8:00 hours local time) on that day, a witness who was working in a field in Villarejo de Salvanés saw the helicopter at a high altitude, going in the direction East-West. After a few seconds he looked again and saw that the aircraft had lost considerable altitude while it was approaching where he was standing. When it was vertically above the witness, it turned 180º thus flying West to East whilst making a lot of noise and then crashed into the ground violently.

There was no fire. The aircraft was destroyed and the pilot was killed due to the impact with the ground.

The most probable cause of the Helisureste EC-GQX accident is considered to be the incorrect assembly of the half-scissors assembly during programmed maintenance tasks, as a consequence of the incomplete information supplied by the relevant section of the aircraft’s maintenance manual.