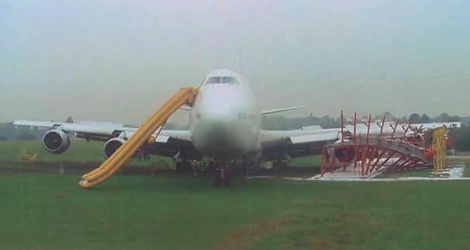 After an uneventful flight from Tel Aviv and a normal ILS approach on runway 05R of Liege, the Cargo Airline 4X-ICM aircraft touched down. 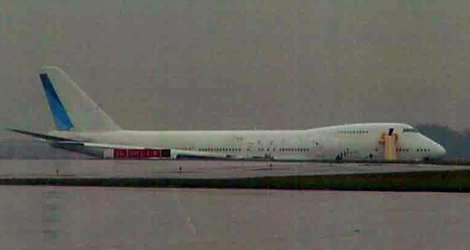 Everything being normal during the first part of the landing roll and normal deceleration being noted, the Captain cut off the autobrakes at an estimated speed of 100kts via brake pedals in order to stop the aircraft further by manual braking.

At an estimated 3000ft from the runway end, the pilots of Cargo Airline 4X-ICM noted that there was “no feeling of deceleration”.

At 80kts no slow down of the aircraft was noted despite “full braking”. The end of the runway was reached with a speed of 50kts and the aircraft had veered 30° to the right compared with the runway QFU.

The aircraft continued its right turn during the slide in the grass and mud behind the concrete runway, to come to a stop against the ILS antennas 500ft from runway end and perpendicular to runway heading. The crew and passengers evacuated uninjured via the right slide.

The probable causes and factors of the mishap are:

The fight crew of JET 2 flight G-CELC were carrying out an ILS approach to Chambery Airport, in IMC, with the autopilot engaged and the LOC (localiser) and VS (vertical speed) modes selected. The crew reported that they had observed some anomalies with the ILS and DME...
Read More