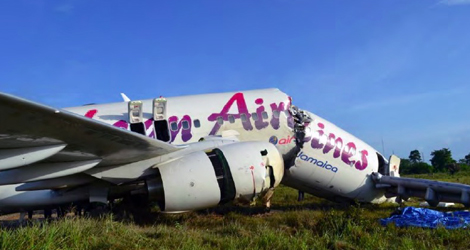 The aircraft landed at CJIA on runway 06 (RWY06) in the hours of darkness at 05:32hrs UTC, following an RNAV (GPS) approach.

The aircraft touched down at approximately 4700 feet of the 7448 feet long runway, some 1700 feet beyond the runway touchdown zone.

The runway was wet. The crew was unable to stop the aircraft on the remaining runway surface and it exited the end of the runway approximately 20ft left of the center line, breaking through a fence and coming to rest on the bottom of a 20ft high earth embankment.

The final position of the aircraft was approximately 130ft from the end of the paved surface of RWY06 and 64ft off the extended runway center line.

The aircraft suffered damage beyond economic repair. It broke into two sections in the vicinity of the first class bulkhead. Both engines were destroyed by the impact and foreign object debris (FOD) ingestion.
There was no post-crash fire. There were no fatalities.

One passenger suffered a broken leg which resulted in an amputation. Several other passengers and crew suffered minor injuries during the accident and evacuation

There was poor coordination (CRM) during the landing phase, a critical phase of flight, the CVR did not record any positive actions from the flight crew, towards the end of the flight.

The probable cause of the accident was that the aircraft touched down approximately 4700 feet beyond the runway threshold, some 2700 feet from the end of the runway, as a result of the Captain maintaining excess power during the flare, and upon touching down, failure to utilize the aircraft’s full deceleration capability, resulted in the aircraft overrunning the remaining runway and fracturing the fuselage.

Contributory Factors The Flight Crew’s indecision as to the execution of a go-around, failure to execute a go-around after the aircraft floated some distance down the runway and their diminished situational awareness contributed to the accident.