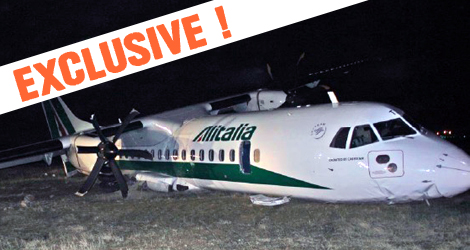 After an uneventful approach in Rome Fiumicino, with gusty cross winds, according to the ground traces and by additional evidence acquired, it seems that the Carpatair flight AZ1670 touched the runway at the airport of Fiumicino at 19:32 , close to the center line of runway 16L, at a distance of about 560 m from the threshold.  After the first contact with the runway, the aircraft would attempt three more times the touch down, during which the nose gear and later the main landing gear collapsed.

After the last contact (4th and last one) with the runway, Carpatair flight AZ1670 would permanently be supported by the fuselage, crawling for approximately 400m before stopping completely.

Throughout the swiping the aircraft’s trajectory was leaning to the right, only to stop on the grass, at about 30m from the edge of the runway, near the intersection called “DE”.

During the course of the sweep, the aircraft was leaning to the right by performing a rotation of about 170° on its vertical axis, stopping with the nose oriented at 330° magnetic degrees.

As soon as the Carpatair flight AZ1670 stopped, the two flight attendants, assisted by the crew members of another company on board as positioning crew, took care of the process of the evacuation of passengers, who, after exiting the aircraft fuselage, waited for the authorities to come and help.

The first emergency vehicles of firefighters came to the scene after 10 minutes and due to the absence of a possible fire condition, they positioned themselves around the aircraft ready for intervention.
A doctor, who arrived at the scene at the same time of the Police Department, would provide for the immediate relief of the wounded ones while carrying out the process of the nursing triage in order to encode the rescue urgency.

The morning of the 3rd of February, the ANSV staff, returned to the crash site of Carpatair flight AZ1670 for further operational inspection, acknowledged that, after the first inspection, the livery of the Italian carrier for which the flight had been operating, had been removed from the aircraft leaving out only the identification marks and the flag of nationality.

These are the evidences of the investigation of Carpatair flight AZ1670 accident :

Cause of the Carpatair flight AZ1670 accident was identified as “human factor“.

In particular was caused by an improper conduct by the PF (Captain) during landing, not consistent with what is expected from the OM in an environment characterized by the presence of significant problems (presence of crosswind with the values at the limit /excess of those permitted for the ATR 72) and in the absence of an effective CRM.

The event may have been influenced by the following factors.

Download Original Report     Download English Report
Aviation Accidents Database made an unofficial english translation of the original report : it is copyrighted, you are welcome to download it here and distribute under Creative Commons BY-NC-ND