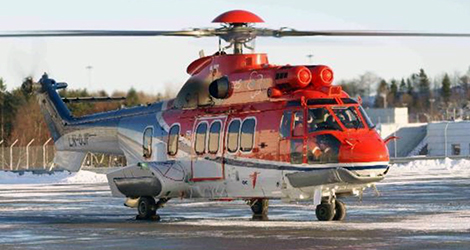 CHC Helikopter Service flight HKS241 operated with an Airbus Helicopter EC225LP (registration LN-OJF) carried out transportation services for Statoil ASA on a contractual basis, including services from Bergen airport Flesland (ENBR) to the Gullfaks oil field in the North Sea. 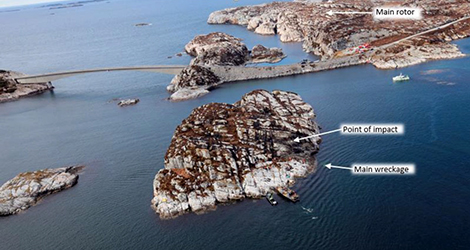 Available information indicates that regular routines were followed on the day of the accident. The normal check-in time for the crew was 45 minutes before scheduled departure.

The crew met and planned the trip with regard to destination, weather, fuel required and available weight for uploading passengers and cargo.

20 minutes, at the latest, before the scheduled departure time, the pilots carried out exterior and interior inspections of the helicopter.

The flights were flown according to standard IFR flight plans.

The crew had already made one round trip with LN-OJF (flight HKS240) that morning.

It departed from Flesland at 0702 hours to the Gullfaks C platform (ENGC) with return to Flesland where the helicopter landed at 0851 hours. 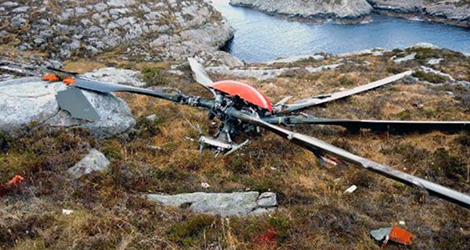 The helicopter lifted off from Flesland for the second round trip (HKS241) at 1005 hours. It landed at the Gullfaks B (ENQG) helideck and kept the rotors running while the passengers disembarked and 11 passengers boarded for the inbound flight.

The ground stop lasted 12 minutes and LN-OJF lifted off from Gullfaks B at 1116 hours and climbed to 3,000 ft.

The co-pilot was pilot flying (PF) on the return flight towards Flesland. Everything was according to plan.

According to the Flight Data Recorder (FDR) information, the helicopter maintained cruise altitude of 3,000 ft until shortly before reaching the coast.

It then descended according to Air Traffic Control (ATC) clearance to 2,000 ft, and flew level at 140 kt for about one minute.

During this period, the helicopter climbed about 120 ft before the main rotor detached and the helicopter started to descend following a ballistic curve towards the ground.

The helicopter hit the small Storeskitholmen island near Turøy at approximately 1155 hours.

The impact forces destroyed the helicopter, before most of the wreckage continued into the sea. Fuel vapour made a white cloud above the accident site, which immediately ignited and started a fire on the island.

The main rotor detached above the western end of the Turøy Bridge and continued to fly on its own in a wide erratic descending left hand turn towards the north and fell down on the island Storskora.

The LN-OJF failure scenario has been identified as the structural degradation of a second stage planet gear, a critical part in which subsurface cracks developed undetected to a catastrophic fatigue failure.

The fatigue fracture initiated from a surface micro-pit in the upper outer race of the bearing, propagating subsurface while producing a limited quantity of particles from spalling, before turning towards the gear teeth and fracturing the rim of the gear.

The investigation has shown that the combination of material properties, surface treatment, design, operational loading environment and debris gave rise to a failure mode which was not previously anticipated or assessed.

From this investigation there are significant lessons to be learned related to gearbox design, safety assessment, fatigue evaluation, condition monitoring, certification and the continued airworthiness of the AS 332 L2 and the EC 225 LP helicopters, which also could be valid for other helicopter types.

PIA Pakistan Airlines flight PK8303 crashed short of a runway in Karachi Airport, over a residential area, on May 22, 2020. It was a domestic flight from Lahore and it was operated with an Airbus A320-214 registration AP-BLD. 99 people were on board, 2 passengers...
Read More