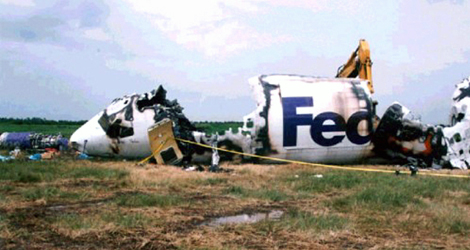 The captain, first officer, and flight engineer were seriously injured, and the airplane was destroyed by impact and resulting fire. Night visual meteorological conditions prevailed for the flight, which operated on an instrument flight rules (IFR) flight plan.

The accident flight crew of Federal Express flight FX1478 reported for the accident flight in MEM at least 1 hour before the flights scheduled departure time of 0412,2 as required by FedEx. The airplanes departure from MEM was delayed slightly because of an adjustment to a cargo pallet; the airplane was pushed back about 0424.

According to postaccident pilot interviews, cockpit voice recorder (CVR)3 and flight data recorder (FDR) evidence, and air traffic control (ATC) records, the climb and cruise phases of the flight were routine and uneventful. The first officer was the flying pilot, while the captain performed the non-flying pilot duties for the accident flight.

According to the CVR transcript of Federal Express flight FX1478, about 0511, the flight engineer received the TLH weather information from the Gainesville Flight Service Station, which indicated: scattered clouds at 100 feet, 18,000 feet, and 25,000 feet; wind from 120º at 5 knots; visibility 9 statute miles; temperature and dew point 22º C (Celsius); and altimeter setting 30.10 inches of mercury (Hg).

The flight engineer related this information to the captain and first officer and asked which runway they would use at TLH. About 0512:41, the captain stated that they would land on runway 27 at TLH. The CVR indicated that about 0513:13, a controller at Atlanta Air Route Traffic Control Center (ARTCC) cleared the pilots of flight 1478 to descend to and maintain flight level (FL) 2404 at their discretion. The captain acknowledged the clearance.

According to the CVR transcript of Federal Express flight FX1478, about 0519:38, the first officer asked, you wanna land on nine if we see it? He added, we got a PAPI on nine, too. The captain responded, yeah, maybebe a longer taxi for us, butway were comin in probly two seven be about as easy as any of em. The first officer said, okay.

About 0524:03, the controller advised them to expect a visual approach into TLH and to report when they had the airport in sight.

According to the CVR, about 0524:23, the captain stated, runway nine PAPI on the left side I dont know, you wanna try for nine?

The first officer indicated that he thought he saw the runway about 0530:56; he called for flaps 2 about 0531:10 and flaps 5 about 12 seconds later. About 0532:34, the first officer stated, I hope Im lookin in the right spot here. The captain responded, see that group of bright lights kinda to the south down there and you see the beacon in the middle of it ? right over there you’re kinda on about ten mile left base or so. The first officer then indicated that he had been looking at the wrong flashing light.

The CVR indicated that, about 0535:42, the captain advised TLH traffic that flight 1478 was turning onto final for runway 9.

About 0536:10, the flight engineer queried flight and nav[igation] instruments?, and the captain responded, cross-checked, no flags. About 0536:20, the first officer said, sorry bout that I was linin up on that papermill or something.

As the first officer started speaking, (at 0536:20.2), the CVR recorded the ground proximity warning system (GPWS) announce that the airplane passed through 1,000 feet above ground level (agl).14 About 0536:23, the captain said, thats all right, no problem. About 0536:37, the airplane was slightly more than 2.5 nautical miles (nm) from the airport and was transitioning from an angled base-to-final leg to line up with the runway.

The Safety Boards airplane performance study indicated that, at this time, the airplane was 1.8 nm west of runway 9, descending through 500 feet agl at a vertical speed of 1,248 feet per minute (fpm),16 with engine power settings of about 1.17 EPR and an airspeed of 152 knots. Also about 0536:49, the CVR recorded the first officer stating, [Im] gonna have to stay just a little bit higher I’m gonna lose the end of the runway.

Federal Express flight FX1478 was 0.9 nm west of runway 9, descending through about 200 feet agl at a vertical speed of 528 fpm and an airspeed of 146 knots; the PAPI indication observed from the cockpit would have been four red lights.

Federal Express flight FX1478 collided with trees in a right-wing-low, slightly nose-up attitude during the approach to runway 9 then impacted the ground, coming to rest on a heading of 260º degrees about 1,556 feet west-southwest of the runway.

A postimpact fire ensued; however, the three flight crewmembers exited the airplane through the captains side sliding cockpit window before the fire reached the cockpit. The accident occurred about 74 minutes before sunrise.

None of the flight crewmembers indicated that they ever saw all red lights on the PAPI during the approach.

The National Transportation Safety Board determines that the probable cause of the accident of Federal Express flight FX1478 was the captains and first officers failure to establish and maintain a proper glidepath during the night visual approach to landing.