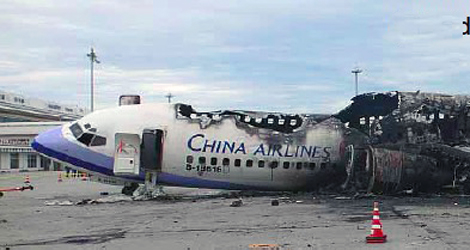 On August 20, 2007, a Boeing 737-800, registered B18616, operated by China Airlines flight CI120 took off from Taiwan Taoyuan International Airport on a regularly scheduled Flight 120 of the company, and landed at Naha Airport.

At about 10:33, immediately after the aircraft stopped at Spot 41, fuel that was leaking from the fuel tank on the right wing caught fire and the aircraft was engulfed in flames.

There were 165 people on board China Airlines flight CI120, consisting of the Captain, seven other crewmembers, and 157 passengers (including two infants). Everyone on board was evacuated from the aircraft and there were no dead and wounded. The aircraft was badly damaged and destroyed by fire, leaving only part of the airframe intact.

10:26:52 The Aircraft landed (touched down) on Runway 18.
10:27:14 The Aircraft began turning left on the runway to enter Taxiway E6.
10:27:49 The No. 5 slat began retracting while the Aircraft was in transit from Taxiway E6 to Taxiway A5.
10:28:09 The No. 5 slat retracted completely after the Aircraft entered Taxiway A5.
10:31:36 The Aircraft turned to the right to leave Taxiway A1 and aligned its nose with the Aircraft Stand Lead-in Lines for Spot 41.
10:31:57 China Airlines flight CI120 stopped (zero ground speed) in Spot 41
10:32:00 Engine shutdown procedures were performed for both engines.
10:32:44 A ground crew member switched on the interphone on the Aircraft’s nose.
About 10:32:53 Fire broke out somewhere in an area aft of the No. 2 (right) engine and spread to the right wing leading edge near the No. 5 slat and the apron surface below the No. 2 engine.
About 10:33 Several air traffic controllers (hereinafter referred to as “the Controllers”) the airport traffic control tower (hereinafter referred to as “the Tower”) saw black smoke and confirmed a fire on the Aircraft on the ITV monitors (showing images from the airport monitoring cameras).
10:33:05 The assistant maintenance engineer reported the fire breaking to the Captain over the interphone (saying, “Cockpit, Ground, Number Two Engine Fire!”).
10:33:42 Having received the fire report, the Captain visually confirmed himself black smoke and informed the cabin crew of the emergency situation, saying, “Attention! Crew On Station!”

China Airlines flight CI120 : watch the video of the accident !

It is considered highly probable that the accident of China Airlines flight CI120 occurred through the following causal chain: When the Aircraft retracted the slats after landing at Naha Airport, the track can that housed the inboard main track of the No. 5 slat on the right wing was punctured, creating a hole. Fuel leaked out through the hole, reaching the outside of the wing. A fire started when the leaked fuel came into contact with high-temperature areas on the right engine after the Aircraft stopped in its assigned spot, and the Aircraft burned out after several explosions.

With regard to the cause of the puncture in the track can, it is certain that the downstop assembly having detached from the aft end of the above-mentioned inboard main track fell off into the track can, and when the slat was retracted, the assembly was pressed by the track against the track can and punctured it.

With regard to the detachment of the washer, it is considered probable that the following factors contributed to this: Despite the fact that the nut was in a location difficult to access during the maintenance works, neither the manufacturer of the Aircraft nor the Company had paid sufficient attention to this when preparing the Service Letter and Engineering Order job card, respectively. Also, neither the maintenance operator nor the job supervisor reported the difficulty of the job to the one who had ordered the job.