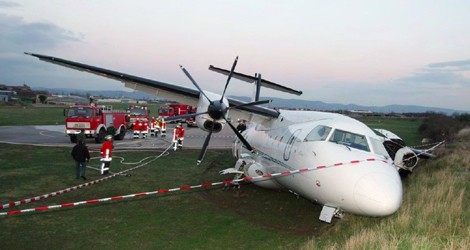 Cirrus Aviation flight C91567 was a Do 328-100 that had taken off from Berlin-Tempelhof to a scheduled service to Mannheim City. Three crew members and 24 passengers were aboard the airplane. The co-pilot was the Pilot Flying (PF) during this flight.

After an uneventful cruise flight the approach to runway 27 was carried out according to the published LOC/DME approach procedure. A few seconds prior to the touch down the co-pilot handed over the controls to the Pilot in Command (PIC).
He continued the approach. Due to an inappropriate engine power setting the main landing gear touched down for the first time after the touchdown zone and the airplane touched down for good in the last 150 m of the runway.

The crew stated that after touchdown the power levers could, at first, not be pulled into idle and therefore no thrust reverse was available. Thereupon the Emergency / Park Brake (E/P Brake) was activated.

The airplane overshot the runway and hit an earth wall about 50 m behind the end of the runway.

The accident occurred at 1745 hrs CET.