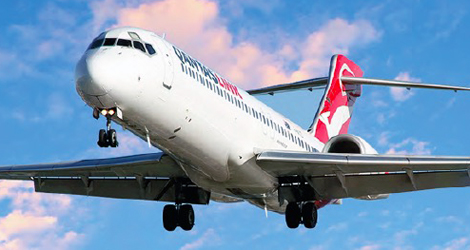 On 13 October 2010, a Boeing 717-200 (717) aircraft, registered VH-NXD (NXD), was being operated by Cobham Aviation Services Australia on a scheduled passenger flight from Perth to Kalgoorlie, Western Australia.

Cobham Aviation B717 VH-NXD was due to depart at 1150 Western Standard Time1 with 97 passengers, three cabin crew and two flight crew onboard. The copilot was to be the pilot flying. The flight crew began their pre-flight planning about an hour prior to the scheduled departure time. They noted that NXD was expected to be late in returning to Perth from the previous flight, but operations were hopeful of an on-time departure. After accessing the required weather and en route information, the flight crew attempted to complete the flight plan via the operator’s computerised flight planning system. However, due to problems with the computer, the flight planning process had to be completed manually and the flight plan submitted via telephone.

After arriving at the aircraft, the flight crew began preparing the aircraft for the flight. Those preparations included obtaining the local weather conditions and calculating the regulated take-off weight (RTOW). About 3 minutes prior to departure, the passenger and baggage compartment loading information was received and printed via the communications addressing and reporting system (ACARS) onboard the aircraft.

The pilot in command (PIC) of Cobham Aviation B717 VH-NXD read out the relevant information for the copilot to enter it into a hand-held computer (personal digital assistant or PDA) that calculated and printed the aircraft’s load sheet.

After verifying that the load sheet figures agreed with the ACARS printout figures, the PIC of Cobham Aviation B717 VH-NXD read out what he believed was the zero fuel weight (ZFW) from the load sheet.

The copilot entered that figure into the flight management system (FMS) then enunciated the FMS-calculated take-off weight (TOW), which the PIC checked was below the RTOW calculations that were made earlier. The PIC reported that the preparation of the aircraft and programming of the FMS were normal and not rushed. The aircraft was pushed back for departure 18 minutes after the scheduled departure time. The flight crew reported that the departure and cruise phases of the flight were uneventful.

In preparation for the approach and landing into Kalgoorlie, the flight crew reviewed the local weather conditions.

That review indicated that the conditions were relatively benign with the wind favouring an approach to runway 29 and the FMS was programmed accordingly. Based on the aircraft’s landing weight as derived from the ZFW and fuel load, the FMS calculated a landing reference speed (Vref) of 116 kts. Given that the local weather conditions were benign, the flight crew elected to use the default minimum additive of 5 kts, making the approach speed (Vapp) 121 kts.

At about 1310, the flight crew joined the Kalgoorlie circuit with the autopilot and autothrottle engaged and proceeded to configure the aircraft for landing. By about 1312, the aircraft’s landing gear and flaps were fully extended and the airspeed was reducing through about 160 kts.

The copilot recalled that, after commencing a turn to position the aircraft for landing, he ‘didn’t like the speed that the autothrottle was trying to command’.

He ‘was always holding the throttles high as the autothrottle system was unable to cope with the conditions’. The copilot stated that ‘the pitch limit indicator was bouncing down and the Red zipper was bouncing up, constantly overriding the autothrottles’. Both the PIC and copilot perceived that the handling difficulties were due to turbulence. As the airspeed reduced towards 121 kts and due to his ‘dislike of the situation’, the copilot disengaged the autopilot. However, the autothrottles remained engaged ‘as a backup’.

During the turn onto final approach, the stick shaker of Cobham Aviation B717 VH-NXD activated momentarily.

At about 1321 and after establishing the aircraft on final approach, the copilot noted that the aircraft was below the required approach path. As the copilot increased the aircraft’s pitch attitude, the stickshaker activated for about 2 seconds. Following the necessary recovery actions, the approach was no longer stabilised and a second go-around was conducted.

The third approach was conducted by the PIC at a reported approach speed of about 130 kts.