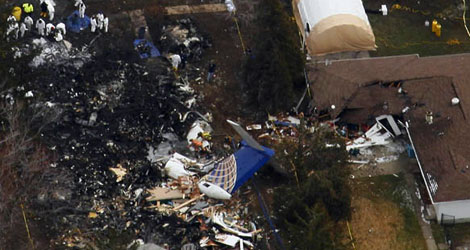 On February 12, 2009, about 2217 eastern standard time, a Colgan Air, Inc., Bombardier DHC-8-400, N200WQ, operating as Continental Connection flight 3407, was on an instrument approach to Buffalo-Niagara International Airport, Buffalo, New York, when it crashed into a residence in Clarence Center, New York, about 5 nautical miles northeast of the airport.

The 2 pilots, 2 flight attendants, and 45 passengers aboard the airplane were killed, one person on the ground was killed, and the airplane was destroyed by impact forces and a postcrash fire.

The flight was operating under the provisions of 14 Code of Federal Regulations Part 121. Night visual meteorological conditions prevailed at the time of the accident.

The National Transportation Safety Board determines that the probable cause of this accident was the captain’s inappropriate response to the activation of the stick shaker, which led to an aerodynamic stall from which the airplane did not recover.