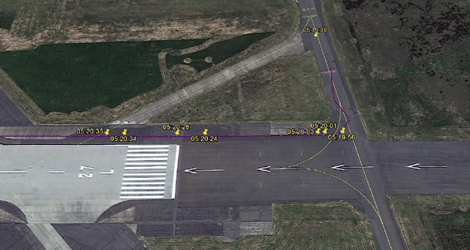 4 crewmembers and 65 passengers were onboard.

During the pre-flight planning phase, the flight crew experienced difficulties with the combination of:

At 05:15:20 hours, Kastrup tower instructed the flight crew of DAT Danish Air Transport flight DX171 to taxi to the holding point at runway 27L via taxiway E, and the aircraft was cleared to cross runway 27R.
The first officer read back the taxi instruction to Kastrup tower, and the commander repeated the taxi instruction to the first officer.
The aircraft departed the civil apron and started taxiing towards the holding point at runway 27L.

In order to line up the aircraft on, what the commander thought were, the runway centerline lights, the commander of DAT Danish Air Transport flight DX171 made a sharp right turn.

While slowly taxiing on the underrun of runway 27L towards the threshold of runway 27L, the aircraft hit a runway edge light (red light) on the right-hand side of runway 27L.

The right main gear hit elevated runway edge lights along the right-hand side of runway 27L.

At 05:20:48 hours, the commander aborted the take-off roll and manoeuvred the aircraft back to the centreline of the runway of runway 27L.

In darkness and hazy weather conditions, the flight crew lined up the aircraft on the runway edge lights along the right-hand side of runway 27L instead of the runway centreline lights of runway 27L.

A combination of environmental, operational, and human factors contributed to the sequence of events: